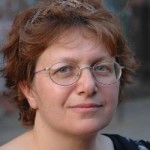 Throughout her journalism career, Mary D’Ambrosio has made a point of honing in on places in the midst of social upheaval and charging ahead to get the story. As a full-time reporter, she worked as a correspondent in Latin America in the 1980s and Russia during the fall of the Soviet Union. Since then, she has settled into a rhythm of teaching journalism ― prior posts ave been at Columbia, Central Connecticut and New York universities  ― and writing.

Last summer, she traveled through Turkey and Sicily to interview refugees from Syria and Africa. This spring, she will incorporate a similar emphasis on the refugee experience in a course she will teach at Rutgers University. The course will pair journalism students with Syrian refugee families who have settled in New Jersey. It’s a topic that has more relevance than ever, when hundreds of thousands of Syrians are fleeing to Europe alone since 2014, inspiring a fierce policy debate there that reverberates here in the U.S.

D’Ambrosio shares her story with Diverse.

How D’Ambrosio got hooked on journalism: “When I was in high school, like a lot of young writers, I was writing songs and fiction in my room. Finally, I told my mom I wanted to be a writer. She said, ‘Honey, you’re never going to make money that way, how about journalism?’ So I started working at the school newspaper. I felt that journalism gave me a lot of power and authority at a young age. I would get to talk to school officials, the police. That’s really where my interest began.”

Why she became an international correspondent: “[In college] I did a study abroad program in Italy, but when I got there, I was kind of surprised that it wasn’t as expected. That was really a turning point for me: I thought I would be eating good food and enjoying weekend trips. Instead, Italy was very fraught at that time. This was in the early ’80s. There had just been an assassination attempt on the pope, and there had just been a recession, so a lot of young Italians were unemployed. It was a real revelation to me. I understood then that we don’t have the right image of other countries sometimes. After that, I got interested in Latin America, so I went to Nicaragua and started reporting on the war. I think it’s really important for journalists to be reporting from other countries to bring home, as much as possible, an accurate view of how another place works.”

On the refugee crisis in Turkey: “Refugees have been coming to Turkey for a long time. You know the famous picture of the poor little boy who died on a Turkish beach that grabbed so much attention? I actually lived near that beach for three or four months. What a lot of people don’t know is that refugees have been crossing those seas and dying for 20 years. Local reporters will talk about the heartache of it. This particular photo caught people’s attention on social media, but it happens all the time.

“So when the [refugee crisis worsened], and we were seeing boatloads of refugees cross the sea, hordes of people, storming the gates, so to speak, I was disturbed and felt that we weren’t getting the full story. These people, who had been drummed out of their countries with little else but the clothes on their backs, are individuals, and I wanted to tell their story.”

How the Rutgers class will work. “The [Rutgers journalism] department places a very strong emphasis on social justice themes. The idea in [this class] is to pair up students and connect them with a refugee family. It’s not an easy kind of journalism to do. It’s much harder than interviewing a public official, or covering a fire, or something like that. You have to get involved in the people’s lives and ask them difficult questions. I think it’s good for students to have to learn how to build that kind of empathy with someone they’re interviewing.”

n the limits of journalism during times of massive humanitarian crises: “I feel that there are limits to journalism, because there’s been so much chronicling [of this issue]. We have reporters following refugees on their journey; videos; a recent piece in The New York Times about a Syrian girl who was shooting her own short documentary about her life in a refugee camp.

” There are limits when all we can do is chronicle. The other part of journalism, which was prevalent in the era when I was getting into the field, is to fix the problems we write about. I don’t see that happening here. We don’t have a real settlement plan for these millions of people. Even in Turkey, there are millions of Syrian refugees, and you can see how, even in Istanbul, it can be very difficult for them to settle. Many Syrians will say, ‘We couldn’t stay in Turkey, because there was nowhere to work.’ And truly, where they are going there isn’t much work either. It isn’t like there’s a perfect place. I feel that we don’t have a solution.”