Advocates Call for Schools to Stand By Undocumented Students

At a time of escalating fears of deportation, faculty and administrators should align themselves with undocumented students and actively fight to secure their future in the United States.

That was one of the key takeaways from a recent panel at George Mason University about undocumented students and their struggle for a place in American society. 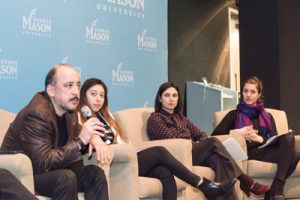 Aldo Bello, director of the featured documentary — “DREAM: An American Story” — praised DREAMers for signing up for DACA.

“Shame on us if we’re not with them,” said Dr. Elizabeth Vaquera, an associate professor of sociology and director of the newly established Cisneros Hispanic Leadership Institute at The George Washington University.

“Educators, administrators, whether it’s in primary school, secondary school, I don’t care, universities, we need to be their champions,” Vaquera said. “We need to be side by side.”

Vaquera said helping undocumented students is about more than just identifying as a supporter.

“Being an ally is not an identity. It’s an action,” Vaquera said. “Those educators that want to be there and support the students, we need to do the homework, be with them, make ourselves available, and make yourselves available in your university and make it known that you are a person who wants to help, learning, staying up to date and providing support.

“Because it should not be on the shoulders of undocumented students or their documented allies,” Vaquera said.

Vaquera made her remarks Monday during a panel discussion titled “DACA, DAPA, & Deportation: Defending Dreamers and their Families.” The panel followed a screening of a documentary titled “DREAM: An American Story,” that recounts longstanding and heartbreaking attempts to persuade Congress to pass the DREAM Act, a bill that would have created a formal path to citizenship for young people in the United States illegally but who came here as children.

While Vaquera called on educators to be vocal supporters of DREAMers, at least one member of the audience said some university-based supporters prefer to take a more low-key approach in order to avoid putting their institutions in the crosshairs of opponents.

“How do you expect these students to be upfront and center at rallies, at protests and demonstrations, when they most likely are in danger of deportation?” Tobar said. “A lot of times they’re in fear and I think that’s why it’s important to keep working to educate faculty and staff and for them to understand the importance of this issue and being on top of immigration policies and the memorandums that are coming out.”

Tobar was referring to a series of executive orders signed by President Donald J. Trump to crack down on illegal immigration and to make it easier to deport those who are undocumented.

Susannah Volpe, managing immigration attorney at the D.C. office of Ayuda, a social service organization that helps immigrants in D.C., Maryland and Virginia, said the executive orders make it very difficult for immigrants to feel secure.

“I think the one constant is that everything is changing,” Volpe said.

She noted that various aspects of the executive orders have called for “expedited removal” and made it easier to deport illegal immigrants who are merely suspected of having committed a crime, whereas the Obama administration prioritized removal of actual criminals.

“Jaywalking gets the same treatment as homicide,” Volpe said. “You can be charged and not found guilty, but that doesn’t change priority under the new system.”

Aldo I. Bello, director of the featured documentary — “DREAM: An American Story” — praised DREAMers for doing the right thing by signing up for DACA, an Obama administration program whose acronym stands for Deferred Action for Childhood Arrivals, but said they may now be in danger for doing so.

“Three-quarters of a million students signed up with the Department of Homeland Security and gave their information,” Bello said. “Right now DACA is not under threat — or at least that’s not what’s being said.

“But personally I don’t trust it. I just don’t,” Bello continued. “Those kids gave their information and gave their parents’ and other family members’ information to the DHS, and what’s going to happen if DACA goes away?

“We need to help them. And you can by becoming an ally,” Bello said. By standing by these students who have worked so hard, who are the actual definition of the American Dream, who have been active … at a time when they didn’t have any political muscle, they are something to be admired.”