Accessibility Is Hallmark of Vargas Presidency

Kendall Basham, who graduated in May 2017 from Southeast Missouri State University, always had been an admirer of the university president, Dr. Carlos Vargas-Aburto. To surprise Basham on her birthday, Dylan Kennedy, a senior and vice president of Southeast Missouri State’s student government, went to Vargas’s office and arranged for the president to join the friends for lunch. 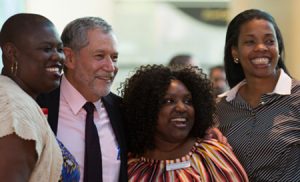 “She said that if he had commented on her Facebook, that it would just make her day,” Kennedy explains. “So I decided to take that a step further.”

On a fall afternoon in 2016, as the two students ate lunch in a conference room on campus that Kennedy had decorated with balloons for Basham’s birthday, Vargas and his wife, Pam Vargas, who works as the director of research and grant development at Southeast Missouri, joined them. During their meal, Vargas chatted with Basham about her school life and her plans for the future and shared stories about his own college experience.

“Talking to students one-on-one is extremely powerful,” he says. “There’s this perception that the president is too busy, and I am totally against that. It’s important that the students feel that I can sit down with anybody and talk about anything.”

Vargas was born in Oaxaca, Mexico, to a working-class family. His parents had not finished high school, but they emphasized the importance of education.

“My father and my mother always instilled in us a desire to learn, to read and to improve ourselves,” he recalls. “Now that I look back, I realize how positive and powerful that motivation was.”

As he entered school, Vargas was free to pursue different interests. But this exploratory phase of his academic career was short-lived. “I took my first physics class in junior high, and I never looked back,” he says.

Vargas explains that a university education in Mexico was not a financial burden for his family.

“One of the advantages you have in Mexico is that college is pretty much free,” he says. “We were a humble family, and we did not have much money at all.”

Vargas completed a bachelor’s degree in physics at the National Autonomous University of Mexico (UNAM). He then felt the drive to do more schooling abroad. He considered Germany and the United States. The decision became easier after the University of Michigan responded very quickly and enthusiastically to his application.

Vargas completed his Ph.D. in physics and aerospace science in 1978, specializing in electron beam technology and radiation effects on materials. He has completed experimental work using a Van de Graaf particle accelerator to carry out environmental pollution studies.

Upon finishing his doctorate, he returned to his undergraduate alma mater to work as a faculty member. Two years later, in 1985, he was hired as a professor at Kent State University in Ohio.

“Little by little, I started realizing I had an interest in the administrative side of the university,” Vargas explains. “As a faculty member, I started to develop more ideas as to how things can be done better. I started innovating in a natural way.”

Vargas, whose son has served two tours in Iraq and Afghanistan, received his American citizenship last summer. Although his legal status has never been an obstacle for him, he says becoming a citizen was a meaningful milestone. “It made me whole,” he says.

“Schedule me for anything if you need to talk” has been his slogan during all of his public appearances, says Peyton Mogley, a senior at Southeast Missouri and president of student government. She continues, “He is extremely transparent. I think that’s part of his appeal. He’s so charismatic and enthusiastic. He’s everywhere.”

Mogley has seen Vargas at all kinds of university events, from football games to student theater performances.

Vargas says he has emphasized his willingness to listen to all members of the university community.

“In Mexico, we have a saying, you never learn in somebody else’s head,” he says. “What that means is that you only learn from what happens to you. I just believe in my case that isn’t true. I learn from what other people’s experiences have been.”

Faculty members have also noticed his impact on student life.

“The students love him,” says Dr. James McGill, professor of chemistry and chair of the faculty senate, adding that he has even seen Vargas playing soccer with students on weekends.

Vargas has also faced considerable obstacles during his time at Southeast Missouri. In January, Missouri Governor Eric Greitens approved a $55.9 million cut to the state’s higher education budget. Shortly after, Vargas announced that the university’s budget would be cut by $3.43 million.

“When funding goes down, you consider increasing tuition, and that really has an impact on the students and their families,” says Vargas. “I’m worried about continuing to provide the support our students need to be successful.”

Other university leaders are hopeful about Vargas’s ability to address these budget cuts.

“He’s very data driven. You can tell he’s a scientist,” says Dr. Diana Rogers-Adkinson, dean of education. “If we want to bring a new program forward, he’s going to hold us accountable to the data, not just [go] on gut or instinct.”

McGill says that Vargas has held open forums for students to explain what these financial setbacks mean.

“I thought they did a great job of getting out in front and communicating those expectations,” says McGill, who is concerned that Vargas and other university leaders will need to make some difficult decisions. “I feel like they’re going to do it in a thoughtful, planned, looking-to-the-future kind of way. I’m hopeful and optimistic.”

“Many people were scared,” says Mogley, adding, “Dr. Vargas didn’t leave any student in the dark.”

“If we improve our retention then that means we are doing a number of things right,” Vargas says.

He explains that he did not want to present the university with 25 strategic goals. He made sure the entire university community knew that retention was the priority.

Under Vargas’s presidency, the university is beginning to implement the Master Advisor Program, which prepares professors to mentor their students in a holistic way.

Faculty are encouraged to become more aware of any personal or financial problems that might be preventing a student from succeeding so that he or she can find the necessary support.

Vargas says the university is also working on being more accommodating with class schedules.

Making sure that students are able to enroll in the classes they need is an important way to ensure retention, he explains. Free tutoring programs have also expanded during his presidency.

Vargas has emphasized the importance of diversity and inclusion on campus. He has fostered partnerships with St. Louis Graduates, the Wyman Center and other organizations in Missouri that help provide college access to students of color.

“He’s raised the question of what does it mean to be diverse,” says Mogley. “I think he has made students really excited about having that conversation.”

Mogley understands that for many students these are challenging discussions to have, but she feels that Vargas has encouraged students to engage in them nonetheless. “I think he would tell you diversity comes with respectful conflict,” Mogley says. Vargas looks forward to meeting and developing a relationship with the incoming class.

“I’m trying to counteract negative perspectives these students are exposed to,” he says. “Don’t let anybody tell you you’re not college material.”

Joseph Hong can be reached at jhong@diverseeducation.com.