The Board of Trustees at Morehouse College concluded a six-month search when it voted on Sunday to appoint a Harvard University professor as its new president. 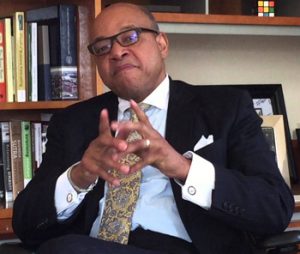 The historically Black men’s college in Atlanta announced on Monday that Dr. David A. Thomas would begin as the institution’s new executive leader in January, ending Harold Martin Jr.’s term as interim president. Thomas hopes to continue the tradition of fostering leadership at Morehouse. Heading for a college known for prominent alumni such as the Rev. Dr. Martin Luther King, Spike Lee, Shaun King and the recently elected Mayor of Birmingham, Randall Woodfin, Thomas has considered how he can continue this legacy.

“The way I see myself contributing to it is simply by trying to lead the school in its efforts to make sure we’re providing our students a transformative educational experience,” he said. “We’ve been successful at doing that for the last 150 years, and my role as president is simply to find ways to enhance that process.”

The author of two books and a dozen journal articles, Thomas was a faculty member at the University of Pennsylvania’s Wharton School of Business, after which he held positions at Harvard as both a professor and administrator. Then, from 2011 to 2016, Thomas served as Dean of Georgetown University’s McDonough School of Business. In 2017, he returned to Harvard as the H. Naylor Fitzhugh Professor of Business Administration.

According to Morehouse’s statement, “Thomas was chosen as the top candidate because of his visionary leadership as a business school administrator and his proven track record in fundraising, which includes a capital campaign that raised more than $130 million in five years for Georgetown McDonough.”

Although Thomas’s official tenure at Morehouse will commence in 2018, his relationship with the college started decades ago when he first learned of the institution as a young boy witnessing the tumult of the Civil Rights Movement.

“I was born in 1956, so I was too young to actually be out in the streets, but I was fascinated by what was going on,” he said. “I read about Martin Luther King, and I read that he had gone to this college called Morehouse. From that point I said, ‘OK, I’m going to Morehouse.’”

As a high school senior, Thomas applied to two colleges: Yale and Morehouse. While the former offered him a full scholarship, Morehouse provided no grant aid. “My father pointed out the math,” he recalled. “I went to Yale, but I always wanted to be at Morehouse.”

Now that he has finally made it to Morehouse as a distinguished scholar and administrator, he recognizes its unique identity. Thomas said that one of his main goals at Morehouse will be “thinking about ways to create options for students that might allow them to reduce the cost of our education.” He explained that one possible option would be offering high school students more opportunities to earn college credit. He said he will also work to better connect students to internships.

“What I want to do is tap into the aspects of Morehouse’s culture and heritage that make it a strong institution and build on those to secure the future of Morehouse.”

Staff writer Joseph Hong can be reached at jhong@diverseeducation.com