Katherine Kerwin didn’t like to see a portion of the student fees she pays being spent to bring conservative speaker Ben Shapiro to the University of Wisconsin.

Kerwin didn’t agree with Shapiro’s criticism of what he said were attempts to chill free speech at colleges and universities, including the idea of “safe spaces” for people made uncomfortable by hearing controversial points of view.

But she was not among the rowdy protesters who tried to interrupt Shapiro and who demanded that his right-wing campus sponsor, Young Americans for Freedom, be banned and cut off from official funding.

That’s where Kerwin draws the line.

“I’m a Democrat. I don’t want to fund the College Republicans or Young Americans for Freedom,” Kerwin said. “But we’re in college. We should be in a setting where not everybody has the same ideology. We can’t eliminate things because we’re so closed-minded that we don’t want to pay for an organization that we don’t believe in.” 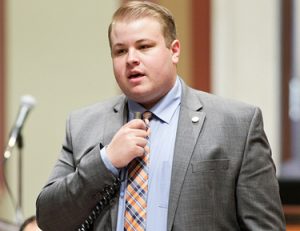 Attempts to allow exactly that have sprung up in Wisconsin and Minnesota, part of a growing movement in which college costs and campus politics converge.

In addition to some activists on both sides of the political divide, Republican elected officials in those states have called for letting students opt out of required fees that go to clubs and causes with which they disagree.

They say that, in addition to slowing the growth of fast-increasing student fees, their proposals would give students the right to vote their consciences when choosing how their money is divided up.

“You have students, regardless of where they are on the political spectrum, who are funding groups that while not partisan are certainly ideological and are taking strong ideological positions,” said Drew Christensen, a Minnesota state representative who has pushed for letting students at public universities there opt out of certain fees.

“The students I’m trying to look out for are the students in the middle,” said Christensen. “Not Democrats or Republicans, but students who are just trying to work their way through school and graduate with as little debt as possible.”

Shrouded as they are behind the headlines about speakers being shouted down or banned from campuses, proposals like these raise the question of whether freedom of speech includes the right of students to prevent their money from going to certain groups, from the University of Wisconsin’s Sex Out Loud sexual-health organization to the University of Minnesota’s Campus Atheists, Skeptics and Humanists.

Courts have so far ruled that universities and colleges can require that their students pay for clubs like these, as long as the groups are “viewpoint neutral,” meaning anyone can join them or attend their functions.

This means a campus Christian organization has to take non-Christian members or the Student Democrats must admit Republicans to get a share of student fees. It’s a requirement that seems absurd to Malcolm Kline, executive director of Accuracy in Academia, which works against what it considers liberal bias in higher education.

Student fees have grown to 21 percent of college costs, or an average of $1,885 per student last year at four-year public universities.

Kline and other critics wonder why campus organizations of any religious, political or philosophical persuasion should get money from student fees at all, rather than just charging dues to the people who want to become members, or fundraising from like-minded off-campus donors.

“If you took this off the table, there is definitely enough outside money to support these groups,” Kline said.

But that would mean an end to viewpoint neutrality “and the freedom of ideas on campus,” said Kerwin, who is working to defend the existing system this year as the legislative affairs chair of the University of Wisconsin’s student government.

“If just groups that have big national pocketbooks get funded, that’s great, but we wouldn’t see these other groups that don’t have any sort of national base,” such as Wisconsin’s Working Class Student Union, she said.

Erwin Chemerinsky likens fees to taxes. “I wish there were a way I could opt out of my taxes going to things I don’t like, but I can’t, because the tax system would collapse if I did,” said Chemerinsky, dean of the University of California, Berkeley, School of Law and coauthor of the new book “Free Speech on Campus.”

“I regard student fees for student groups the same way,” he said. “If students could opt out of paying the student activity fees, the campuses will lose that multiplicity of student groups and diverse views.”

Wisconsin Gov. Scott Walker has proposed making optional the so-called “allocable segregated fees” that students have to pay at University of Wisconsin campuses to support such organizations.

At the flagship campus in Madison, these fees cost each student $178 per year; other “non-allocable” fees for university services including health centers and athletic facilities, which come to $1,082 per year, would not be affected.

In a statement, Walker spokesman Tom Evenson pointed out that $103,000 collected in this way went last year to Sex Out Loud for such programs as a class in fetish sex.

“We can’t eliminate things because we’re so closed-minded that we don’t want to pay for an organization that we don’t believe in.”

“At a time when we want to make college more affordable, we should not be forcing all students to pay for things such as Sex Out Loud,” Evenson said.

Students don’t appear to be opposed to their money being used in this way, said Jordan Gaal, chair of Wisconsin’s Student Services Finance Committee, which decides which groups get how much money.

“I hear this in the news, that people are angry and upset, but we hold open meetings twice a week and I have never in my two years [on the committee] seen anyone come in here and complain about where their segregated fees are going,” Gaal said.

Fees in general are drawing mounting scrutiny, however.

As universities and colleges have shifted more and more of their expenses to student fees, they’ve grown to 21 percent of college costs, according to research by Robert Kelchen, a Seton Hall University assistant professor of education who studies this. That came to an annual average of $1,885 per student last year at four-year public universities.

Fees are rising far faster than tuition, Kelchen has found, more than doubling at four-year public universities when adjusted for inflation since 2000 while tuition increased an inflation-adjusted 80 percent.

At the University of Minnesota Twin Cities flagship campus, students pay $436.60 per semester in activity fees.

While Christensen’s proposal to let students opt out of certain parts of that fee didn’t pass this year, he said he’ll reintroduce it next year. He did push through a law that took effect Sept. 1 requiring a student vote to approve any increase in the student activity fee of more than 2 percent.

“It’s unfair to those students who are working their tails off to stay in college and don’t have time for any of the groups” to have to pay for clubs they don’t join and with whose missions they may disagree, he said.

Even if the opt-out measures pass, they’d have an uphill legal battle, said Lisa Atkins, co-leader of the Higher Education Practice Group at the law firm Ogletree Deakins and a former attorney for the Tennessee Board of Regents. If some groups are more affected than others, they could claim that the impact is discriminatory, for example, Atkins said.

He doesn’t have political targets, Christensen said. “We all would agree that at most schools there are probably more liberal-leaning student groups, but there are also those on the conservative side,” he said. “I don’t think it’s right either way.”

This story was produced by The Hechinger Report, a nonprofit, independent news organization focused on inequality and innovation in education. Sign up here for our higher-education newsletter.