The inclusion of Hip Hop studies in academia has become a growing trend at colleges and universities around the country. Just recently, one Virginia university has invited a homegrown rapper to co-teach a Hip Hop course that is scheduled to be offered to students in the spring. 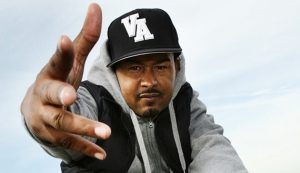 Mad Skillz, a Hip Hop artist will co-teach a course in the Spring at University of Richmond.

The University of Richmond announced that rapper Mad Skillz will be an artist-in-residence at the institution starting in January 2018. He will partner with Dr. Erik Nielson, an associate professor of liberal arts, to co-teach “The Voice of Hip Hop in America,” a course that explores the music genre’s evolution and influence on social and political culture.

“My expectation for the residency is to be able to teach the students a lot more about this culture than they might know,” said Mad Skillz in an interview with Diverse. “I’m super stoked to get started and bring something exciting and fresh to the university that will benefit students for years to come.”

Born Donnie Lewis, Mad Skillz has worked with Jay-Z, Nas, Dr. Dre, Missy Elliot and The Roots among many other notable artists in the genre. His 1996 album “From Where???” references his upbringing in Richmond.

The residency will serve as a homecoming for Mad Skillz, who credits his start in Hip Hop to working at the university’s radio station. Nielson said that the rapper will be a great partner for the course due to his “deep connections” to the university in addition to his knowledge about the industry and about Hip Hop as an art form.

The two met last year through a student taking one of Nielson’s Hip Hop courses. He said that he immediately knew that he wanted the rapper to join him in the classroom.

Traditionally, conversations about Hip Hop focus on cities like New York, Atlanta and Los Angeles. But with Mad Skillz involved, the duo plan to teach students about Hip Hop in the broadest sense and include various elements of the culture.

“We’ve committed ourselves to providing a national picture but also making sure that we look at what Richmond has had to offer and how cities like Richmond are part of this overall culture,” Nielson added. “We want to look at how this community has contributed to, but has also been influenced by Hip Hop culture.”

Conversations throughout the course will center on how marginalized groups “found their voice through Hip Hop” and found ways to “assert themselves socially, artistically and politically,” Nielson said. The professor adds that the course’s nuanced conversations will include Hip Hop’s complications — misogyny and the genre’s tendency to glorify violence — in order to fully understand the range of values and rhetoric in the music.

Nielson began teaching Hip Hop while teaching African American literature about 10 years ago. The musical and literary traditions, he said, are so closely intertwined.

“There are other universities that have brought artists in before this, so we are not the pioneers, but this [course], I think, is the future because we’re actually bringing the people who have done the work into the classroom,” Nielson said. “When I was an undergraduate, rap music was not something that you could look at from a scholarly perspective. It was something that you listened to. That probably shouldn’t have been the case then, thankfully it’s not the case now.”

Dr. Michael Eric Dyson, Neal said, was a pioneer in this regard. He regularly brought guest artists into the classroom to talk about their work and experiences as early as 15 years ago.

“Michael Eric Dyson, by this time, had done several books on Hip Hop so it actually was a wealth of scholarship that was out there, much of it in the early days aiming at justifying why it was something to be studied,” Neal said.

Neal taught his first Hip Hop class in 2000 at SUNY-Albany in response to demands from students who wanted a cultural and historical context for Hip Hop. Now, he is a prominent scholar on Hip Hop’s cultural impact having taught courses like “The History of Hip Hop” for the last seven years at Duke with 9th Wonder, whose real name is Patrick Douthit. A number of artists and thinkers such as Talib Kweli, Rapsody, Dr. Eboni Marshall Turman and Jason Moran have visited the class.

“Particularly when there are places where you have access to artists, where there are resources, it has not been unusual at all for guest artists to come in, whether it be on the rapping side of it or the production side,” Neal said in a recent conversation.

Artists and scholars also note that academia’s ability to encourage dialogue about larger themes in society make Hip Hop and its lyrics about lived experiences an interesting field of study.

“So much converges in Hip Hop,” Nielson said, adding that while the genre emerged in the South Bronx, it is a continuation of a centuries-long tradition of Black storytelling in the United States with connections to slave spirituals, jazz and blues music and the blaxploitation films of the 1970s. “Hip Hop embodies so many aspects of American, and specifically African American artistic and political culture.”

Nielson pushes for other scholars teaching Hip Hop courses to include the artists themselves to the extent that they want to be included.

As Nielson and Mad Skillz prepare for the upcoming semester, they are quick to mention that the course will be “a difficult class” and one that challenges students to think critically about an art form and a culture “that they already think they know in some cases,” Nielson said.

“After taking this class, I want my students to not only know as much about Hip Hop as we could fit into a semester, but also learn something about themselves as well,” Mad Skillz noted. “I feel as though Hip Hop can be used [in] academia and should have been a long time ago. It’s a part of these kids’ lives way before they even enter college and some of their parents’ as well.”

University of Richmond Will Use Modular Homes for Students to Quarantine