Dr. Luns C. Richardson, who served as president of Morris College for 43 years, died on Saturday at the age of 89.

Richardson had the distinct privilege of being one of the nation’s longest-serving college presidents. And among presidents of historically Black colleges and universities (HBCUs), the ordained Baptist preacher outlasted his contemporaries, taking the longevity mantle from Dr. Norman Francis, who retired in 2015 after leading Xavier University in New Orleans for 46 years. 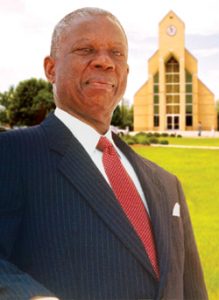 Richardson retired from Morris College last June, marking an end to an era, particularly at a time when colleges are experiencing high turnover rates among their leaders. Until 2014, Richardson had served for 56 years in a dual role as the pastor of Thankful Baptist Church, a small congregation, located in Bamberg, South Carolina.

“His legacy could be defined by his reputation as a hands-on president,” said Dr. Marc C. David, who chaired the division of Religion and Humanities at Morris College from 2005 to 2013. “For example, Dr. Richardson insisted on interviewing every job applicant who visited the campus. During those interviews, he gave each candidate a history of the college, shared a personal story or two and tested the candidate’s knowledge of the college’s website. Afterward, he would wish the candidate the best and carry on with his day. If the applicant was hired, it was not uncommon for Dr. Richardson to extend his personal welcome.”

A native of Hartsville, South Carolina, Richardson came of age as the nation was in the midst of racial turmoil. As a youngster, he made the three-and-a-half-mile walk to a two-room grammar school that was racially segregated.

It was at home, however, that Richardson was taught certain traditions that stayed with him even after he became a college president.

“Saying grace before meals and reciting a Bible verse before the evening supper was a family ritual,” Richardson, who was affectionately known as “LC” during his youth, told Diverse in a 2017 interview.

As the country was immersed in World War II, Richardson graduated from Butler High School in 1945 as class valedictorian and then went on to earn his bachelor’s degree from Benedict College. Later, he earned graduate degrees from Teachers College at Columbia University and pursued additional studies at South Carolina State University, Rutgers University and the University of Tennessee.

Chaplain and teacher, Richardson also served as a high school principal before moving into higher education. He later worked at Benedict College, serving for 16 months as acting president, and was the executive vice president at Voorhees College in Denmark, South Carolina.

By the time he had settled in as president of Morris College in 1974, Richardson was eager to turn the school around but had no idea that his presidency would eventually stretch across four decades.

“I thought I’d be here for about five years,” he recalled during his interview with Diverse, adding that he stayed longer because he was determined to make some substantial changes, including ensuring that the liberal arts college became accredited. “We achieved our initial accreditation in December 1978, one year ahead of schedule.”

During his tenure, Richardson presided over the construction of 17 buildings and was instrumental in growing the school’s endowment from $30,000 to more than $12 million.

He also put Morris on the map, luring well-known political figures such as former Vice President Joe Biden to campus.

Richardson received more than 100 honors and awards and was the recipient of numerous honorary doctorates including from Benedict College, and Simmons Bible College in Louisville, Kentucky.