Whitfield-Harris Pushes for Diversity in Nursing

Studying public health as a college student, Dr. Lisa Whitfield-Harris was hesitant to expand her career to higher education, a field that required her to do more public speaking than she was used to. 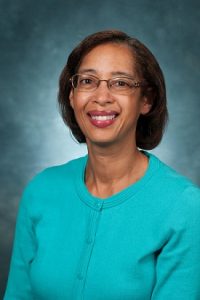 “I knew I wanted to be in nursing,” she says. “I didn’t figure it out until later on in my career that I actually wanted to make a difference for students.”

Whitfield-Harris is currently an assistant professor and program director of the Community Systems Administration at Philadelphia University + Thomas Jefferson University’s Jefferson City Campus. She plans and coordinates the activities of the Community Systems Administration (CSA) MSN program, teaches at the graduate and undergraduate levels and acts as a faculty adviser for graduate students.

Before this position, Whitfield-Harris was a staff nurse at a hospital, an operations administrator for a nonprofit and a nursing adviser at another higher education institution. She says she likes to “keep active” since she gets “bored quickly” working in the same position for a long time.

A Philadelphia native, Whitfield-Harris is a shining star in her industry and has already received several honors, awards and research grants, including ones from the National League for Nursing and the Association of Black Nurse Faculty, Inc.

“I concluded that the cultural climate of the workplace and the underrepresentation of African-American nurses in the nursing profession affected the faculty’s productivity, satisfaction levels and identity,” says Whitfield-Harris. “Microaggressions were experienced from colleagues and administrators on a daily basis.”

“These experiences led the faculty to believe that they had to assimilate to their colleagues’ behaviors, to fit into their workplace climate,” she adds. “They also had low opportunities for tenure, poor health conditions and high attrition rates from the schools of nursing.”

Her dissertation, titled “The Lived Experience of Black Nurse Faculty in Predominately White Institutions,” studied 15 nurse faculties in higher education, with a majority residing in the Northeast, and included two participants who were male nurses. She says she chose the topic after reflecting on her own experience in nursing — not having a role model who looked like her during her nursing journey, both professionally and throughout her education.

The issue of diversity is high on Whitfield-Harris’ list of priorities in and out of the workplace. She says she abides by the Health Resources and Services Administration (HRSA) definition of diversity, meaning “ethnic minority and the different races or ethnic groups in the country,” and has added gender to her definition because of the increasing number of males working in the public health field.

“It can also mean having different opinions in the room. It gives you a better experience … I guess different avenues to look at because not all Black faculty are the same,” Whitfield-Harris says. “Diversity is just diverse knowledge or diverse interest or diverse experiences, and it doesn’t matter what you look like, in my opinion.”

Outside of work, Whitfield-Harris loves to read, go to the movies, attend concerts, crochet and play with her two cats. Married for 26 years, she has one son, who is graduating from college this year.

She says she enjoys mentoring students and discussing nursing and why it is worth it.

“It’s not just giving medication, it’s educating the patients as well, and using your skills to help someone get better and improve their life, especially when they go home. That’s my biggest passion, because the patients that are always in the hospital, they leave,” she says.

“And that’s where I am in public health nursing, going to care for them when they leave the hospital. That’s what I like. That continuity of care is very important.”

Whitfield-Harris says that she enjoys connecting with students and seeing them grow in the profession.

“It’s the domino effect,” she says. “We can send a message. We can make a change. So that’s comforting, that they’re listening to me, and that I can make a difference with them. Not changing their opinion, but understanding why they have that opinion.”