One thousand DACA students, also called “Dreamers,” will receive full scholarships to pursue an associate’s or bachelor’s degree at Southern New Hampshire University over the next five years.

The scholarships, from a fund of $20 million, are made possible through partnerships between the university, The Shapiro Foundation and TheDream.US.

Eligible students, part of the Deferred Action for Childhood Arrivals (DACA) program, will receive degree assistance through College for America, SNHU’s competency-based education program, according to Lauren Keane, a spokeswoman for the university. 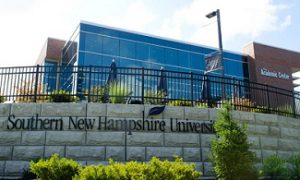 The U.S. Department of Education has said that most DACA students who were brought into the United States by undocumented parents and are not U.S. citizens, are unable to receive federal funding for various reasons, but have encouraged students to still fill out the federal Free Application for Federal Student Aid (FAFSA) for possible state and college aid.

Virtually all institutions of higher education require students to complete the FAFSA to determine eligibility for any type of financial aid.

But for some, even that step presents a challenge.

Those creating a FAFSA account, as well as verifying their identity, must have a Social Security number, which the majority of DACA students do not possess because to obtain one, a noncitizen must present proof of identity and work-authorized immigration status. The FAFSA also requests information from federal tax returns to determine Pell Grant eligibility.

Not having access to financial aid deters some students from seeking higher education.

“As an institution of higher education, we are in the business of hope,” said SNHU president Paul LeBlanc. “We have hundreds of thousands of young people who have known no country but the U.S., but that are denied the financial support that gives them access to higher education. As a society, we can’t afford to squander their talent and drive. Among them might be the next brilliant scientist, general, community leader, inventor or entrepreneur. We must give them the tools to realize their potential.”

The university hopes these scholarships will grant students the higher education that many of them feel would be impossible to obtain otherwise.

Massachusetts high schooler Luanna Vieira is one of the first DACA students to be awarded the scholarship, according to the Associated Press.

“I was speechless. I almost cried, to be honest,” Vieira said. “I was giving up on college because of the cost. It was like a sign from God that I can go to college.”

Vieira was brought to the U.S. from Brazil at the age of 3. Both of her parents are undocumented, the AP reports.

DACA defers deportation proceedings in two-year terms for certain undocumented individuals who were brought to the country by parents and who meet other qualifications when applying for the program. The program – created by an executive order issued by President Obama in 2012 under the Department of Homeland Security after Congress did not pass “DREAM Act” legislation providing a pathway to citizenship for those children – is at risk unless lawmakers come up with a solution to amend it.

DACA, which Obama said would be temporary, became controversial because enacting immigration laws falls under the purview of Congress, and some regarded the actions of the former president as executive overreach.

Last year, President Trump gave Congress a deadline to fix the program or his administration would begin shutting it down. When Congress failed to come up with a solution, the administration extended the deadline to the end of this month. Meanwhile, some federal judges have issued injunctions to keep DACA in place for current participants while the issue is resolved.

Organizations such as TheDream.US are searching for ways to allow the DACA scholarships to follow students out of the country if they get deported.

According to SNHU, the university already works to educate refugees in several countries such as Rwanda and South Africa in hopes of educating those who may never be able to attend an institution of higher education.

“We hope our political representatives can resolve this matter as quickly as possible,” said LeBlanc. “In the meantime, we are going to focus on the students and getting them access to education that works for them and creates the opportunity to be productive, contributing members of our society.”

SNHU’s partnerships with The Shapiro Foundation and TheDream.US were forged to propel students to success.

“The American dream must be open to dreamers,” said Ed Shapiro, trustee of The Shapiro Foundation. “We have…come to appreciate the power of SNHU’s competency-based education program. Recently, we have been working with the SNHU team on its global refugee expansion plan and are excited to now be able to extend this opportunity to 1,000 dreamers.”

TheDream.US partners with dozens of colleges and universities across the nation to help thousands of dreamers in their pursuit of degrees. Dreamers generally range in age from 20 to 35.

“We will be able to serve the many dreamers who do not have the option of attending a traditional on-campus college,” said Don Graham, co-founder of TheDream.US. “These dreamers work, have families and simply do not have the resources nor flexibility to adjust their lives to a traditional college calendar. And yet, they want nothing more than to get a college education so they can better support themselves, their families and their communities.”

Sierra Darville can be reached at sdarville@diverseeducation.com