The plight of Black males continues to take center stage at institutions such as The Ohio State University, which hosted its 13th annual National Black Male Retreat over the weekend.

The gathering, which drew more than 120 Black male college students from across the nation, has been hailed as a model for providing young men an opportunity to reflect on their personal and professional growth away from their respective campuses. 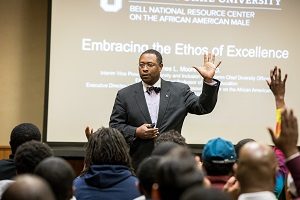 “A higher education offers immense benefits to students, such as higher salaries, better health outcomes and greater social mobility,” said Dr. James L. Moore III, EHE Distinguished Professor of Urban Education and Executive Director for the Todd Anthony Bell National Resource Center on the African American Male at OSU. “Unfortunately, too many Black males are underrepresented in higher education, and, for those who do attend college, they are frequently confronted with challenges similar to all student populations as well as challenges unique to Black males regardless of the social context.”

This year’s retreat, themed “Developing a Blueprint for Wellness,” comes on the heels of a new report in the New York Times that Black boys raised in America —regardless of their economic backgrounds — earn less in adulthood than their White male counterparts.

Moore, also the Interim Vice Provost for Diversity and Inclusion and Interim Chief Diversity Officer at OSU and an expert on Black males in higher education, spoke to the young men from 18 schools about the importance of embracing the ethos of excellence.

The gathering, at Deer Creek State Park, is “a retreat versus a conference because it is a getaway to work on improving self,” said Moore. “Stated differently, it focuses on developing the whole person — mind, body and spirt. Student attendees are offered important strategies for academic and career success.”

Throughout the weekend, intimate conversations focused on a variety of topics. Sessions titled “Creating a Strategic Plan for Your Professional Future,” “Getting Back to the Basics: Financial Planning 101” and “Black Environmental Literacy: Reconnecting with Black Outdoor Heritage in the United States” proved useful for participants like Steven Jones, 22, a student at Northern Kentucky University.

“I was actually helped with a problem that I was struggling with,” said Jones, who said he needed to hear loving but tough talk on how he could put forth more effort to reach his professional and personal goals. “Actions have to speak louder than words, so I was able to get a reality check.”

Although there is a sizable Black population at NKU, Jones said, being around other Black males has been meaningful.

“It makes me feel good to be around brothers and not just random Black males,” said Jones, who added that despite geographic space, many of the Black males at the retreat are struggling with some of the same issues, including negotiating the college experience as a first-generation student.

Issues like imposter syndrome and racial battle fatigue are issues that many Black males encounter, said Dr. Tyrone C. Howard, a professor of Education at UCLA in the Graduate School of Education and Information Studies’ Urban Schooling Division, and director and founder of the Black Male Institute at UCLA.

Howard, who delivered the keynote address at the retreat, said that it was powerful to see young Black males from across the nation in one place committed to “building community.”

“We want to help fortify these young men,” said Howard, author of Why Race and Culture Matters in Schools: Closing the Achievement Gap in America’s Classrooms. “We want to normalize Black male excellence.”

Dr. Robert A. Bennett III, Special Assistant to the Executive Director of the Bell National Resource Center, said this year’s retreat was the largest to date.

“What has been most refreshing from this year’s group is that you see an all-in mentality,” said Bennett. “It is like they have this sense of urgency, a hunger, that they are eager to improve their personal lives. If you think about it, all of our attendees are from predominantly White institutions, so their presence in these spaces are often contested, underappreciated or ignored completely. But to have the energy they brought to the retreat has been quite refreshing. Guys are already talking about coming next year, so we have no choice but to build upon the 2018 gathering.”