NEW YORK – At a time when many see a reinforcement of racism and oppression, a panel of Black intellectuals at the National Action Network (NAN) convention spoke of being visible and vocal on important issues, producing ideas and creating dialogues. 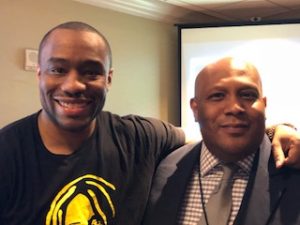 “It’s so important we look beyond the daily headlines and look into what we’re really dealing with,” the Rev. Al Sharpton, founder and president of NAN, said when introducing the “Black Intellectuals” panel Thursday afternoon.

The panel moderator, Dr. Jamal Eric Watson, executive editor of Diverse: Issues in Higher Education, posed the question: “What is the role of the Black intellectual in the age of Donald Trump?”

Dr. Tricia Rose of Brown University said that while Black studies grew out of political activism, today there is a higher challenge around connecting Black thinkers to work on the ground.

“We’ve been battling fake news as academics from the beginning,” she said. “This question of how we should engage has everything to do with how we retain a certain level of objectivity, a certain level of critical engagement—everything cannot be affirmative—but at the same time being willing to challenge the normalized modes of White supremacy that the academy continues to engage with. In the era of Trump, we have to be much more aggressive, much more committed to the moral responsibility that our work entails.”

Dr. Eddie S. Glaude, Jr., the William S. Todd Professor of Religion and Chair of the Center for African-American Studies at Princeton University said the work involves locating and interpreting problems and suggested that intellectuals uncover reality as it is – and as it could be.

“Figuring out how to do this work under threatening conditions and avoid the traps of celebrity, the arrows of envy and the deadly traps that come with both is a very difficult task,” said Glaude. “Every crisis is in search of a history to account for itself.”

“This country is founded on essentially four pillars: capitalism, White supremacy, patriarchy and anti-Black racism,” said Greer. “Our job is to try and explain those things, dismantle them and put together substantive coalitions of our words and our thoughts so we can move forward.”

Benjamin Jealous, the former president of the NAACP and gubernatorial candidate in Maryland, said an often-overlooked Black intellectual is writer and reformer Frederick Douglass, who took the nation’s founding fathers to task for not living up to their own words.

Jealous said young people need to be reminded to have the courage to insist that the United States live up to its promise.

In the age of Trump, Dr. Obery Hendricks, a professor of religion at Columbia University said, politically conscious Black intellectuals should cut through the muck and mire and use their training to analyze and deconstruct White supremacy and keep the citizenry informed. He advised studying government policy and sharing the knowledge; being a resource rather than a prophet and making information understandable to the average person.

“We should explain what developments in the American capitalist political economy mean for us,” said Hendricks. “We have the responsibility to offer the fruits of our knowledge and our studies to those in positions of social and political leadership, so they can use it.”

Dr. Marc Lamont Hill, who is the Steve Charles Professor of Media, Cities, and Solutions at Temple University opened a bookstore in Philadelphia, Uncle Bobbie’s Coffee & Books, to engage the public. He said it is the job of intellectuals to produce ideas, challenge what counts as common sense and engage multiple publics.

Black intellectuals, Hill added, cannot be in conversation only with each other.

In response to Watson’s question about how panelists as Black intellectuals can make their work accessible, Hendricks said they must make a conscious effort to reach those for whom they are writing. He said he prefers to have his books published by non-academic publishers to give them wider exposure.

“Make it accessible so it can make a difference,” Hendricks said.

Jealous, whose training is in criminology, said he is the only gubernatorial candidate in Maryland history to write a comprehensive plan for reforming the criminal justice system.

When Watson asked how Black intellectuals can better engage with activists on the ground, Rose said it’s important to emphasize history. Connecting that curriculum, distributing it to many people and making it accessible provides resources to young people and forges connections, she said.

“There are all kinds of things that are critical, not just about what the problems are now, but how people had a chance to survive those problems by thinking strategically,” Rose added. “You cannot be successful if you think history started last week. Part of the connection is not to tell people what to do. There are things to be learned about history, but there is also a fundamental respect of the conditions young people are facing today — new resources, new opportunities. Make an African-American and Africana curriculum around the legacy of Black people’s activism, culture, politics, engagement as a major accessible part of what we do professionally.”