For anyone who thinks school suspensions of students can’t be a life-altering experience, illuminating data may change their minds. 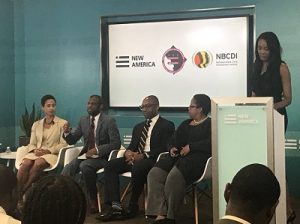 Dr. Ivory A. Toldson, a professor in the School of Education at Howard University and editor-in-chief of the Journal of Negro Education, warned against a defeatist attitude in the nation’s schools, especially pertaining to Black students.

“It’s horrible for a city or a community to have so many suspensions,” Toldson said. “Because when you put them out in the streets, those communities pay for that. I would rather see them in school.”

Suspended students, some research suggests, are more susceptible to at-risk behavior outside of the classroom than inside.

Panelist Anise Walker, school climate specialist and restorative justice coordinator for District of Columbia Public Schools, added: “Data shows they are building prisons based on the number of suspensions in schools.”

Dr. Andre Perry, a David M. Rubenstein Fellow at the Brookings Institution, a research think tank in Washington, D.C. said there should be a ban on suspensions from pre-K through the third grade, “and a lot of our classrooms need more than one teacher.”

Educators and thought leaders contend that it is futile to try to accomplish extraordinary things without adequate resources.

The school-to-prison pipeline phenomenon that has been a major topic of discussion in education circles in recent years is defined as a result of policies that encourage a police presence at schools, harsh tactics such as extreme physical restraint, zero-tolerance policies and other automatic punishments that result in suspensions and out-of-class time, and other actions that could increase a student’s chances of landing in the criminal justice system, according to Teaching Tolerance magazine, a project of the Southern Poverty Law Center.

Not all suspensions are the result of violent or harmful physical behavior by students.

While racial disparities in school suspensions long has been a sensitive subject, the current political climate may make it a bit touchier. As civil rights groups accuse the educational system of racial bias, some observers argue that implementation of less-punitive measures of discipline may make schools more unsafe.

When Black students are expelled or suspended, Perry said, “it basically says they have given up on us.”

Geography may be another factor in the suspension epidemic, according to studies by the Center for the Study of Race and Equity in Education at the University of Pennsylvania.

In 3,022 school districts across the South, in which Black students overall comprised 20.9 percent of enrollment, 100 percent of suspensions in 84 districts were Black pupils.

Perry advocated changing college educational programs for teachers as one way to address the issue.

“There needs to be a fundamental shift,” he said. “There needs to be more time to craft more programs for teachers before they enter the classroom. Teachers need more training to deal with these issues. To learn about alternatives for their students. I believe one of the reasons teachers give up on students is because they throw up their hands and say, ’I don’t know what to do with little Jamal.”’

That conundrum appears to be more prevalent at schools where most teachers and administrators are White while most students are Black.

Toldson suggested an increased emphasis on teachers’ so-called soft skills, such as interpersonal and verbal skills, care and nurture of students, cultural awareness in various communities and ability to work with a diverse group of students.

“We are not here to beat up on our teachers,” she said. “They need help with trauma support, counselors – like the students [do]. It’s not only about funding; it’s also about priorities. We have students dealing with crime issues, gang violence and family dysfunction. And we expect our teachers to play 500 different roles, in addition to their main role they were trained for – and that is to teach.”

Plus, there are housing, economic security and law-enforcement issues in some communities.

“If the overall ecosystem is violent for families,” Perry said, “it will always be difficult for schools.”

Another issue is labeling some educational decisions as implicit bias, which refers to attitudes and stereotypes that subconsciously affect someone’s understanding and actions.

“We have to stop referring to racism as implicit bias,” Toldson said.

Walker advocated more familiarity to stem bias. “Teachers need to get to know more about their communities.”

That can reduce stereotyping and automatic negative assumptions about Black children, in particular.

“We need to move away from punitive and actually problem-solve,” said Mariani. “We have to increase support for these students.”

More teachers of color may be another way to boost support and nurture of students of color, panelists said.

“We have classrooms with more Black and Brown students than we’ve ever seen in this country, and less Black and Brown teachers,” Cross said. “There is more segregation now than in the 1960s.”

Predicted Perry: “I think if more Black teachers are hired, you will see suspensions of Black students go down.”

Panelists also suggested a shift from negatively viewing Black students from a “deficit perspective,” which hinders their learning and development.

“Schools should focus on reminding students of the things they can do well, instead of emphasizing what students don’t do well,” said Toldson. “We don’t focus enough about the happiness of children in schools.”

“There is this belief that in order for Black children to learn, they must be punished. To make them compliant, you punish them. That notion is just wrong.”