PRINCETON, N.J. – Scholars, policymakers and other stakeholders from 12 countries have gathered here to delve deeply into social and emotional learning (SEL), one of the newest frontiers in education that some researchers and practitioners are tying to academic achievement, future labor-market success and personal happiness. 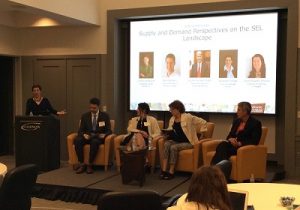 Dr. Catherine Millett of ETS moderates a panel at the “Springboard for Success” conference.

Although in its infancy, SEL demonstrates great potential to boost the success and well-being of students from elementary school to post-graduate school, particularly low-income, first-generation and other groups underrepresented among the ranks of college graduates, according to about 50 participants in a three-day conference co-presented by Educational Testing Service (ETS) and the Austria-based Salzburg Global Seminar (SGS).

“Springboard for Success: How Social and Emotional Learning Helps Students in Getting to, Through and Beyond College” is focused on how to identify and meet the SEL needs of post-secondary students in North America, the critical role of teachers and how best to assess outcomes. The conference began Wednesday and concludes Friday.

On Tuesday, as attendees primarily from Canada, Mexico and the United States made their way to the Chauncey Conference Center on ETS’ picturesque 360-acre campus, the National University System in California announced that South Dakota entrepreneur and philanthropist T. Denny Sanford has given another $100 million to the private, nonprofit system to promote SEL education of children.

The gift – the 82-year-old billionaire banker’s latest in a series over the last five years – will expand his Sanford Harmony program that uses research-based strategies to develop SEL competencies among students in grades pre-K through six.

Now, the initiative has the potential to reach 30 million child students around the globe with the hope of increasing diversity and inclusion in schools and decreasing stereotyping and bullying.

“It’s really great to see that people who have money pick up on the importance of these constructs, and that it can stimulate further discussion,” said Dr. Jonas Bertling, a psychologist who directs two ETS programs for research-based development of socio-emotional characteristics and opportunity-to-learn measures.

“Springboard for Success” participants have come in search of answers, sharing their insights and experiences and probing to learn what has worked – and not worked – for others. En masse, in small groups and one-on-one, they are addressing core questions about what SEL should look like, the best language to define it, how to assess it, how to get teachers and administrators to buy into it and how to sell it to students across the spectrum of demographic and cultural contexts. 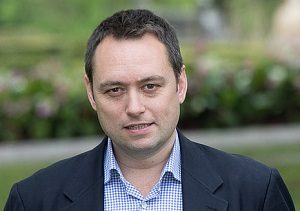 “It’s so many things to so many people, and we don’t know what we’re talking about a lot of the times,” Dr. Carola Suarez-Orozco, a professor of human development and psychology who works primarily with immigrant-origin graduate students at UCLA, said during a panel discussion about supply and demand perspectives on SEL. “It’s a really complex and multidimensional construct on both individual and social levels. It’s the student and the spaces, and we have to figure out how to marry these.”

While SEL is a new approach to many in education circles – and fairly foreign to those outside – ETS founder Henry Chauncey was talking about it back in 1949, noted panel moderator and co-convener Dr. Catherine Millett, senior research scientist at ETS’ Policy Evaluation & Research Center.

Chauncey established ETS in 1947, the same year the first Salzburg Global Seminar convened. ETS and the SGS have been collaborating for nine years.

This week’s conference was organized to promote cross-cultural collaboration in bringing SEL to the forefront of education as a transformative force for equity and social justice in higher ed. Incorporating SEL into the formal educational experience is further along in Mexico and Canada than in the U.S.

“SEL is at a moment,” Noel Baldwin, coordinator for postsecondary education and adult learning for Canada’s Council of Ministers of Education, said during a panel discussion about supply and demand perspectives moderated by Millett. “There is increasing recognition that there are huge benefits to looking at this and working on it as a group.”

Attendees described key SEL competencies as the abilities to communicate interpersonally, direct self, manage emotions, solve problems, resolve conflict, collaborate with others, think creatively and globally, demonstrate empathy and compassion, and persevere. Such so-called soft skills, necessary for success in school and beyond, tend to be cultivated less often in classrooms than mastery of information and quantifiable technical skills, they said.

“We need to make sure our students connect locally, nationally and internationally. The development of our workforce is crucial, and it is crucial for us to be working on this,” said panelist Dr. Guillermo Hernandez, general director of strategic partnerships at Mexico’s National Association of Universities and Higher Education Institutions (ANUIES).

Businesses appreciate what SEL can offer because they recognize that cognitive skills alone are not enough to produce a functioning and healthy workforce, said Suarez-Orozco. Because many students are not equipped with SEL skills and are struggling socially and emotionally, “counseling centers are being overwhelmed” and a significant number of students are manifesting clinical symptoms, she said.

With the average college graduate holding about a dozen different jobs through four major career changes, they need to have developed SEL skills to be able to nimbly navigate the job market and comfortably adjust to different cultural contexts, said Dr. Suzanne Ortega, president of the Council of Graduate Schools in the U.S.

The biggest concern of CGS members in the last 18 months is “growing levels of psychological distress among graduate students,” Ortega said, specifically noting extreme isolation felt by minority STEM students in the dissertation phase of their doctoral degrees.

Another discussion centered on how to gain buy-in from educators and how to train them to embed SEL training into their teaching and curricula.

“If we teach the right way, the students will develop these skills and characteristics,” said Dr. Jennifer Adams of Canada’s Ottawa-Carleton District School Board, in a panel discussion about SEL case studies.

“What we see unfolding on campuses are social and emotional learning issues of students and faculty, and I think retention tells us a whole lot about the ecosystem of an institution,” said Dr. Jennifer Baszile, dean of student success and career development at Trinity College. “I think that most, if not all, other challenges in education in the United States today are in some way or another informed by SEL.”