Following the 104th annual meeting of the American Association of University Professors (AAUP) this week, delegates voted to remove the University of Iowa and Stillman College from its list of sanctioned institutions.

Academic institutions are sanctioned for the infringement of governance standards after investigations reveal serious departures by the administration and/or governing board from generally accepted standards of college and university government endorsed by the association, according to AAUP. 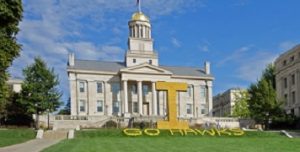 “[The list] is not a boycott,” said Dr. Henry Reichman, AAUP vice president and chair of Committee A on Academic Freedom and Tenure. “It is a way of informing people that the institution is not up to standards. The institutions remain on there and we hope that they would like to get off the list. Sometimes they respond and sometimes they don’t. Typically, most change occurs after a new president.”

Placing an academic institution on the censure list is a way for the academic community to be made aware that an institution has violated principles of standards in regards to academic freedom and tenure, AAUP stated in their press release.

“Sometimes it takes a long time for institutions to get off the list and sometimes it doesn’t,” said Reichman. “Some take it as a badge of honor while others, who are more concerned about their attitudes of faculty, are more eager to get off. However, there are alumni who would not be happy about their institution being put on the sanctions list.”

Two years ago, the University of Iowa was placed on AAUP’s list of censured administration following the selection process of their current university president, Bruce Harreld, who was hired in 2015. The selection process was not transparent and the decision of the final candidate occurred despite faculty objections, according to AAUP’s censure and sanction statements report. However, since AAUP’s investigation, University of Iowa’s faculty senate voted to establish an ad-hoc committee, which focused on reversing the sanction. The committee included members of the board of regents, regents’ staff and the university’s faculty senate. These members focused on AAUP’s key issues during their investigation and produced a best-practices document on presidential searches, according to AAUP’s censure and sanction statements report.

“We are delighted by the news of the sanction removal,” said University Faculty Senate President and Director of Division of World Languages Dr. Russ Ganim. “Especially important is the partnership between the Faculty Senate, the Board of Regents, and the local chapter of the AAUP that led to this favorable decision. We believe to have established a model of collaboration that will benefit shared governance at the University of Iowa not just now but in the future.”

In 2009, Stillman College, an HBCU in Alabama, was put on the sanctioned list following the removal of a tenured assistant professor, who was on his twenty-eighth year of teaching, after he violated the faculty handbook’s policy that prohibited participation in “malicious gossip,” according to AAUP’s censure and sanction statements. The professor had written letters to the board and discussed his opinions with the media about his desire for the president to resign from his position.

Following AAUP’s investigation, however, it was discovered that the administration violated his academic freedom which he was entitled to under the 1940 Statement of Principles on Academic Freedom and Tenure.

In 2017, Stillman College went through various administration changes, including instating a new president as the focus shifted on wanting to resolve AAUP’s sanction. They removed the policy of “proscription of malicious gossip” and changed other academic regulations that were not up to AAUP’s standards.

“The administration [at Stillman] changed and had a very different attitude towards its faculty,” said Reichman. “It used to be run in an authoritarian fashion. The current administration wants to change that and they reached out to us to discuss their changes. The final step in taking an institution off the list is we send someone to the campus and talk to people. We talk to administration but this is so they don’t pull the wool over our eyes. Everyone’s excited about the new changes.”

Schools Adjust to New Rules and Regulations in College Sports