Gordon F. May: The Educator Who Will Never Fully Retire - Higher Education

Gordon F. May: The Educator Who Will Never Fully Retire

Dr. Gordon F. May had not initially thought of entering higher education until his wife proposed the idea to him nearly 30 years ago. 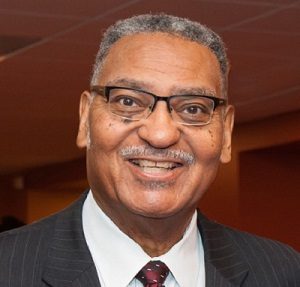 With a background in business management and 15 years of service in the private industry, May took a leap of faith and applied for a part-time position at the Auburn Hills campus of Oakland Community College (OCC) in Michigan.

May, 68, says he did not hear back about the position for another four to five months after he applied until one night, he received a call asking, “Could you start tomorrow night?” he recalls laughing. “And I did.”

At OCC, he taught a Principles of Business Management course and served in various administrative capacities – including as president of two of the OCC system’s campuses over a span of 27 years.

A year later in 2014, the education leader got a second chance to fulfill a dream of his.

May was selected among 50 other candidates to serve as president and chief executive officer of Baltimore City Community College, Maryland’s only state-sponsored community college.

“I’m in the position of my dreams, really,” May says. “I really wanted to be a chief executive officer. I had been a campus president reporting to a CEO, so this was a real fulfillment of a dream of mine. It’s been a great four years.”

May’s time at BCCC will officially come to a close upon his retirement in August. He plans to move back to Michigan to be with his family: a wife of nearly 41 years, two daughters, two sons-in-law and an 18-month-old grandchild — his first.

“It’s been enough time and I need to get back,” he says. “I’m just going to get some rest first, be with family, visit some places I haven’t been, and maybe a year out, look to teach again.

That May still has plans to teach is not surprising to BCCC chief of staff and general counsel Bryan Perry.

“I’m not completely convinced that he’s going to retire. I could see him doing some mentoring and possibly teaching,” Perry says. “In terms of the CEO role, I think he’s retiring, but I don’t think he’s completely retiring from contributing to higher ed.”

Reflecting back on the last four years, there are many things May lists off as successes. They are due, in part, to the “culture of shared governance” fostered in his time at BCCC and to the leader’s insistence on listening to the community.

“Everybody matters — internal and external,” May says. He meets with faculty, other employee groups and student groups like the student government association president and vice president on a consistent basis.

On accomplishing the strategic goals he set for BCCC, May adds, “We listen to the community, we watch the market, we know where the jobs are — the emerging jobs and positions — and we react to those.”

“The community has simply responded to us,” May continues. “We’ve been in existence now for 71 years in Baltimore City. We’re an anchor institution in the city and we just continue to build on that.”

Those who work with May refer to him as a genuine, “stabilizing force” at BCCC, especially when he first arrived at the college that faced accreditation and other subsequent challenges.

“He was able to handle that always under composure,” Perry says. He “never let the stress get to him and was still able to help shepherd the work through.”

Dr. Tonja L. Ringgold, vice president for academic affairs and accreditation liaison officer at BCCC, adds that “kindness comes naturally to Dr. May” and it is “consistently how he treats, thinks about and speaks about others.”

“No matter how you define his positive contribution,” Ringgold says, “it almost always revolves around his selflessness and a willingness to give something in order to help others.”

Ringgold recalls instances of May promoting BCCC events and community causes — such as walking in the community Cease Fire event — and lobbying for the college in Annapolis with legislators.

“In all he strived to make students and employees feel good about where they go to school and work, but more important, he wanted us to feel good about the work we are doing,” Ringgold says.

Describing May as professional, Perry says that May put the college back on the path to being a “great institution again” by reassuring the college and community members that “the college is here, the doors are open.”

His previous professional experience, Perry adds, allowed May to make the community connections needed to sustain the college or expand academic and professional opportunities for students.

“He’s been able to bridge the gap because he takes the time to get to know people and what’s important to them and I think he’s able to express that,” Perry says.

During May’s tenure, BCCC became an “Achieving the Dream” institution, partnering with the non-profit initiative to assist students in maximizing their full potential for academic success, personal growth and economic opportunity.

New degree credentials and certificates were established at the college including programs in cyber-security and assurance, coding, paramedicine and emergency medical services.

Additionally, institutional leaders work with the local high school counselors, advisers and principals to ensure that students seamlessly transition to the college.

Getting BCCC out of “warning status” with the Middle States Commission on Higher Education is among the things May says he is most proud of accomplishing during his tenure. Moving the institution into full compliance a little more than a year into his presidency lifted “a dark cloud” that hovered over the institution, he said. “It was just phenomenal.”

BCCC is now in “great standing” with the commission, May says, adding that the next comprehensive site visit is not scheduled until 2024.

Further, the institution’s standing with the Maryland General Assembly is of note.

The advice May leaves for his successor is straightforward: “Keep student success at the core of every decision and you won’t venture off base.”

Beyond this, he advises future education leaders to “stay the course, impart as much knowledge as possible [and] be good mentors for people” to ensure the success of the generations that follow, he says.

May is taking his own advice and will be meeting with each of the 525 high school students preparing to enter the summer bridge component of BCCC’s Mayor’s Scholars program on June 25. The program ensures that Baltimore City public high school graduates can attend the institution tuition-free starting with 2018 graduates.

For now, though, May says he is prepared for retirement this second time around.

“Who knows, really, what the future will hold, but first and foremost, I’m going to get some rest,” he says.

This article appeared in the June 28 issue of Diverse magazine. It is one in a series of articles about retiring college and university presidents that will run over the next week.