When undertaking American federal grants in the United States and England, we encountered international female students from countries in the midst of or having recently undergone political conflicts, violent kidnappings and civil wars. Now, they are in transitional stages moving toward democratic governments.

This reality was particularly acute when speaking with women in England who were pursuing doctoral degrees, as they frequently referenced conditions in their several African and Asian home countries. Their poignant voices, in response to interview queries, prompted us – as American university women faculty and executives – to ask ourselves how our experiences in leadership roles in American universities could assist in fostering viable options for current and future women university leaders in emerging democratic nations. How might women in university venues address overarching problems of helping to build civil society through their leadership and scholarly roles in the academy?

As African-American women with extensive international experiences on six continents (as deans and university presidents) via multiple Fulbright awards, federal grants and international and philanthropic fellowships, we thought it was crucial to develop a proposal and plans for an international women’s institute for women from post-conflict and transitional nations. We wanted to share what we had encountered over the years and to learn about their particular barriers as women. Newly minted university professionals and seasoned faculty and executives would be invited to participate in the endeavors situated in an American state, namely California. This state would be particularly suited since it has and is undergoing considerable demographic changes, including immigrants from numerous nations and various American racial and ethnic groups who are seeking equity and fairness. Yet in their midst, extreme terrorism was experienced in San Bernardino, where 16 people were killed and dozens were injured. In essence, very contemporary challenges, bedrocks of universities’ roles in public scholarship and engagement, could be portrayed. 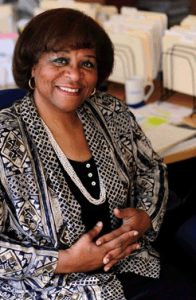 Executive vice president Pennington voiced that, “With all the attention to conflicts around the world … far too often women are treated as victims of conflicts rather than as key agents of change. Universities play a key role in these issues because they are the places that develop knowledge and understanding about how conflicts happen and how they are resolved. Ford has long supported democratic institutions [universities]. Women are a major force in rebuilding societies.”

Dr. Elgeziri declared, “The project is particularly exciting because it brings the innovative lens of women leaders in academia and their roles in conflict resolution, in making the higher education spaces more inclusive for dialogues producing knowledge for conflict resolution.”

Former Global Women’s Issues Ambassador Melanne Verveer of Georgetown University provided the plenary address, wherein she articulated challenges and opportunities for women and girls in advanced and emerging nations that have undergone conflict. She cited research demonstrating that reconciliation and peace agreements are more lasting when women are integrally involved.

Another key address was voiced by Dr. Margee Ensign, president of Dickinson College in Pennsylvania and a former president of American University-Nigeria. The latter university is situated in northeastern Nigeria, in a stronghold region of Boko Haram, where girls and women are often captured. A university’s role in trying to maintain peaceful environments and helping to ensure security – in cooperation with local populaces and their leaders – are valuable models of public engagement in the most challenging conditions for universities. Consequently, university rectors (presidents) and deans participating in the institute envisioned how some safety features might be initiated at their sites so that solid teaching, learning and research continue.

Enhancing academic quality and standards for global recognition and competitiveness – in the race to attain top regional and/or global rankings – are taxing in the best of circumstances. Thus, various materials included modes to help ensure quality programs in light of Ministry of Education and/or Ministry of Science and Technology policies and those of international accreditation and quality assurance organizations such as the Association of Southeast Asian Nations (ASEAN) AUN University Network.

A range of interactive lectures and workshops were undertaken, including those by Dr. Kathleen Kuehnast, director of Gender Policy and Strategy at the United States Institute of Peace. She explicated an array of curricular and policy material that can contribute to conflict resolutions and movements to inclusive democratic endeavors for a range of nations and demographic groups.

Of particular importance were the identification of salient matters, prior to the institute, affecting participants’ universities and/or nations and geopolitical regions. Emerging and mid-career professionals and senior executives were placed in two separate workshops. They interacted with the co-directors to begin creating applied, engaged research to devise bourgeoning universities’ policies and methods that their institutions could initiate for positive transitions.

Given the criticality of the institute, continuous interactions among the participants will ensue via online interactive platforms so that relevant intellectual migration of policy research, leadership ideas and best practices occurs among the women. We hope to continue the engagement and to build a global network.