Notre Dame de Namur (NDNU) is often ranked among the most diverse higher education campuses with a population that is roughly two-thirds students of color.

Federally designated as a Hispanic serving institution (HSI) and an Asian American and Native American Pacific Islander serving institution (AANAPISI), NDNU’s commitment to diversity started with its founding by the Sisters of Notre Dame de Namur in 1851 to provide access to education for underserved populations. 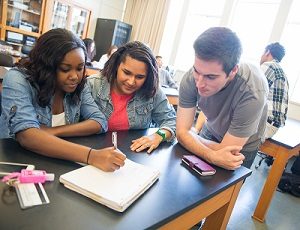 “We at Notre Dame celebrate diversity,” said Dr. Hernan Bucheli, provost and senior vice president for academic and enrollment affairs. “It really is important for us because it started with our mission. It’s not new, it’s just been compounding and we’ve been getting better and better at it.”

Bucheli added that NDNU celebrates diversity through its Catholic mission and values, the curriculum and community-based learning and research experiences that engage students at the Belmont, Calif., school.

Students are required to take nine credits of culture and diversity classes and community-based learning classes. Student-outcomes surveys showed that, while students “have to take [the classes], they end up getting a lot out of it,” Bucheli said.

This year, students, faculty and staff are averaging more than 110,000 hours of community service, which is rooted in NDNU’s mission of social justice and global peace.

“It fluctuates, but that’s kind of been an average,” Bucheli added. “And that’s above and beyond what’s required of them.”

As a result, NDNU received the Carnegie Foundation’s prestigious Community Engagement Classification elective recognition and has been lauded by the federal government as an engaged campus.

Part of NDNU’s success with students also stems from the institution’s support for first-generation and low-income students. More than two-thirds of NDNU’s incoming first-year students are first-generation, and 95 percent of undergraduates receive some form of financial aid.

There are first-generation programs, financial literacy programs and a faculty-student ratio of 11:1. A personalized faculty advising model is an integral element contributing to the institution’s average time-to-degree rate of four years for students. 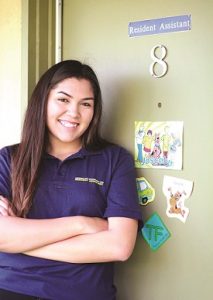 “What we pride ourselves in is making sure that we understand every student’s willingness to do good and do well,” Bucheli said. “Do good in terms of building community, but also getting advised so they can finish on time.”

“We make sure that our students get the attention that they need, that caring and nurturing so they can complete their degree as quickly as possible. We’ve seen that that has been really helpful for them in terms of landing jobs.”

Surveys conducted on NDNU alumni from the classes of 1980 through 2015 show that 95 percent of graduates are employed, and 41 percent of them earn above $80,000.

The financial literacy component for NDNU’s students ensures that they are not taking on excessive debt and that they can pay student loans back after graduation. Students usually graduate with about $23,000 in debt – one of the lowest amounts for a private institution in the Bay area, Bucheli noted.

“We wanted to make sure that we keep our tuition affordable so our students can actually come,” Bucheli said, referencing the school’s access mission.

The mission gives students such as Joscelyn Pardo an opportunity to attend the university, which recently joined a pact between the California Community Colleges system.

The partnership made NDNU one of 36 schools in the Association of Independent California Colleges and Universities that expanded transfer pathways for community college students to attend four-year, private schools.

Pardo, a rising junior  who is majoring in psychology at NDNU, said that as a first-generation student, she did not know what to expect when first coming to college. NDNU’s welcome week, or Golden Fleece Week, helped her make the transition.

“That’s where I met a lot of my friends,” Pardo said. “Since then, NDNU, in general, has just been really supportive of my college experience. I never really feel like I’m doing anything alone. Everyone is trying to help me get through.”

Pardo added that she has enjoyed her experience, saying, “It’s just fun. I like the location. The school’s nice. The staff is amazing as far as professors and my bosses, because I work here, also.”

With experience under her belt, Pardo served as a resident assistant this past year, managing about 30 students, including some students in upper grades who lived on campus. “I enforced policy and helped them get through their year,” she said.

Pardo is an honors student, has made the Dean’s List every semester and will serve as the vice president of the First-Generation Club on campus this school year.

Her club plans to show other first-generation students and their parents that they have a support system at NDNU to help inform them about financial aid, transitioning to college and the overall academic experience.

“We just started last year,” Pardo said. “We’ve been at orientation and Argo [registration] days getting to know students, helping parents out, just giving them the quick rundown of what college is because a lot of parents don’t even know what their kids are doing. They just know their kids want to go.”