Concerns about the legitimacy of the institutional chief diversity officer (CDO) have frequently prompted conversations about the need to professionalize the role. As recently as this year, organizations like the National Association of Diversity Officers in Higher Education (NADOHE) are making headway in elevating the role as an efficient institutional change agent.

At this year’s Standards of Professional Practice Institute in June, NADOHE officers and institute faculty debunked assumptions associated with the diversity officer role and discussed solutions to assist the participating cohort in leveraging their role in order to foster inclusive excellence at their respective institutions.

NADOHE’s efforts to professionalize the role include working to realign diversity practitioners’ work within the necessary power structures at institutions and building practitioners’ competency in its 12 standards of professional practice. 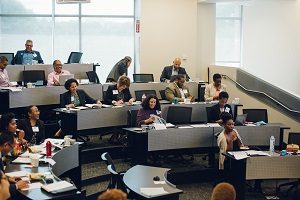 Participants at the NADOHE conference

“When you look at the scope at how large this work is, I think that’s a challenge” in professionalizing the role, says Dr. Clyde Wilson Pickett, a NADOHE board member and chief diversity officer for Minnesota State Colleges and Universities System. “It’s an opportunity to think about how we impact, as diversity officers, all aspects of the institution. Getting other folks to realize that and to help further build upon that work has been one of the opportunities or challenges, if you will, that we have.”

Dr. Archie W. Ervin, president of NADOHE and vice president for institute diversity at Georgia Institute of Technology, points out that, as institutional change agents, the senior-level diversity officer is responsible for making the institution supportive of the success of people “who are there in all dimensions.”

This can look like ensuring access to educational opportunities where students or faculty are validated by being a part of the academic focus or curriculum. It also entails ensuring that all groups on campus have an opportunity to be a part of the “voice and structure of what makes that institution unique,” Ervin says.

The role of the diversity officer

Noting a misleading conflation of HR work and that of a diversity officer, Ervin adds, “HR is about personnel processes, driving the trains, making sure people get paid [and] making sure that you’re doing things right by the rules and regulations. That’s not what our roles are” as diversity officers. Having emerged in the late 1960s due to student protests for inclusivity on campuses, the diversity officer position is a role that is constantly evolving. For many, the role is one of continuous learning.

“It’s the consistent conversation, it’s the consistent work and it’s the consistent engagement that really helps move the needle because this notion of becoming multi-culturally competent is actually a fleeting goal,” says Dr. Shakeer Abdullah, principal consultant at Practical Diversity Associates and assistant vice president at the University of Minnesota. “You do a disservice to [the role] if you’re not thoughtful about why it’s necessary or how you want to approach it. You’ve got to have a strategic approach and you have to make sure it aligns with who you say you are as an institution.”

Dr. Roger L. Worthington, professor and interim associate provost and chief diversity officer at the University of Maryland, has been doing diversity work for more than a decade. “And really, I still learn a lot even being in a group like [NADOHE],” he says.

As part of the NADOHE Presidential Task Force for the Development of Standards of Professional Practice for CDOs, Worthington – who is also editor of the Journal of Diversity in Higher Education – worked with Virginia Tech’s Dr. William T. Lewis, Sr. and Texas A&M’s Dr. Christine A. Stanley to develop the organization’s 12 standards of professional practice in 2014.

The standards give diversity practitioners agency and a research-based framework to guide them in the multiple areas they impact at an institution through diversity, equity and inclusion efforts including academic curriculum and instruction, student support and success, campus climate and institutional recruiting and retention efforts, among other operational or strategic agenda duties.

At the SPPI institute, Worthington cautioned the CDOs against over-attributing agency to the challenges they face because some institutional challenges are outside the CDO’s control.

“Sometimes the challenges that we are not able to overcome are attributed to our lack of effectiveness or lack of agency,” he says, underscoring the importance of self-care and the need to professionalize the role.

Individuals leading efforts to professionalize the role also point out that there is sensitivity around the titles used for the role and what that means for different institution types. For example, the work and official nomenclature of the diversity officer is dependent on if the CDO serves a private or public, small or large university system or community college and at what level in the institution’s power structure.

NADOHE officials continue to advocate for diversity officers that previously have not had senior-level authority to now have a “direct reporting line” to an institution’s president or CEO, executive officials and board of trustees, says Pickett.

Moreover, many diversity leaders say that CDOs should have the authority and responsibility to set strategy, enact policy and be well-resourced.

Ervin is a staunch advocate for the “vice president” or “vice chancellor” title for diversity officers. “You can’t be three layers down and think that you’re going to be a player at the center of power,” he adds.

Because people that occupy the CDO role come to the field from different educational backgrounds or career tracks, there is a lot of variation in the kinds of expertise and perspective they bring to the table, says Worthington.

Most diversity practitioners tend to come from backgrounds in the social sciences, education or even law.

“You see all of these as represented in the field. Many of us come out of the social sciences with Ph.D.’s or the equivalent because that’s what is respected in the academy,” Ervin says. “That, in and of itself, is an interesting thing because there’s an assumption of professionalism that graduate education provides.”

Questions arise as to whether individuals seeking CDO positions should enter certain graduate programs or if they should come to the position with a professional diversity certification.

Abdullah predicts that a specific degree program for diversity officers – one that has been vetted and is grounded in the 12 standards for professional practice, for instance – will not emerge potentially for another few years because political climates and professional climates can impact those kinds of curriculum, he says.

“If people continue to marginalize diversity and inclusion work, then it may not come to fruition,” he adds. “But if people truly value it, if there’s an institution that truly values it, then they can actually be a leader in making this happen.”

Organizations and companies in the diversity space have taken advantage of the void in understanding around the professional maturation of the CDO role.

Organizations such as The Society for Diversity offer professional certifications. It is a business-oriented alternative to the scholarly and social justice component of diversity and inclusion work NADOHE does, says president and founder Leah Smiley.

“Our work is heavily focused on the research and the best practices, however, when we’re talking about really getting a seat at the table, it’s not necessarily based on how smart the diversity and inclusion leader is,” Smiley says, “…the real issue is that organizations struggle with the business value” of diversity and inclusion.

“That’s where the business piece comes in because, from an institutional perspective, we have to be able to do a comparison to show, if we continue along this current path, here are the results that we’ll have in the next 5 to 10 years,” she continues. “Diversity and inclusion is going to prepare us to do business better as an institution so that we can capitalize on opportunities to really ensure that there is sustainability and [to] lead students into the workforce of the future.”

The Society for Diversity’s certification program is through the Institute for Diversity Certification. The organization conducts a survey of participants every two years to ensure that individuals who have been certified are doing the work according to best practices and strategies for organizational sustainability.

There are areas where The Society for Diversity and NADOHE’s differing approaches to diversity and inclusion work align.

“What we’re trying to do is make sure that there is room for respect and civility, as well as for people to share their ideas whether or not they are exactly alike,” Smiley says, adding that, while some may not welcome diversity and inclusion, “it’s here, it’s a reality and you have to be able to navigate through cultural competency and diversity and inclusion if you want to be valued as a professional.”

Still, Ervin says that search firms and educational institutions have approached NADOHE asking them for advice or permission to use the 12 standards of professional practice in the development of their job descriptions for diversity leaders.

He is careful to say that the standards are not a “prescriptive model” for the CDO role, but rather a frame for the role and its expectations.

“You shouldn’t try to take each of these standards and say, ‘These are the 12 things that you have to do,’ because that doesn’t account for the cultural context of the institution,” he says. “If you don’t have Title IX responsibilities, you shouldn’t write Title IX into that position description if it’s not going to be there.”

At the 2018 Standards of Professional Practice Institute, NADOHE leaders did not give the cohort a test or assessment of their mastery of the standards. NADOHE board member-at-large Rosemarie Kilkenny, who is also vice president for Institutional Diversity and Equity at Georgetown University, says that the organization will have to develop a rubric or a survey in the coming years to assess participants’ competencies as they progress in their roles.

However, NADOHE officials and institute faculty hoped that early-career and seasoned diversity practitioners gained a better understanding of their job as a strategic leader for their institution. They also expanded the network for diversity leaders to collaborate and support each other in the complex work they do.

“We’re leading the way toward the professionalization of the role,” says Ervin. “It hasn’t completely arrived, but it’s certainly one that’s recognized as a valid institutional role in higher education.”

This article will appear in the August 9 issue of Diverse magazine.

Diversity Should be Praised, Not Enforced