Dr. Fred A. Bonner II is on a mission to dispel the notion that “good scholarship” — particularly research on African-American and other minority populations — can only be done at elite predominantly White institutions.

Bonner, who holds an endowed chair in Educational Leadership and Counseling at Prairie View A&M University in Texas, has been busy at work building the Minority Achievement, Creativity, and High Ability Center (MACH-III), a comprehensive research center at the public historically Black university (HBCU). Although it is still in its formative stage, MACH-III is almost certain to become a game-changer in the way that research is done on minority populations.

The center’s mission is clear: to produce best practices and scholarship that examine the contemporary issues that impact critical populations such as administration, faculty and students across the P-20 spectrum and beyond into workplace contexts.

Bonner, the center’s executive director, launched the enterprise with a Texas A&M University System Chancellor’s Research Initiative (CRI) Grant in 2015 that provided the initial funding for the creation of the spacious center that is housed within the Whitelowe R. Green College of Education at Prairie View.

Several years later, Bonner says that he has a laser focus on developing asset-based approaches to research on critical populations that will establish Prairie View and the MACH-III Center as a “preeminent clearinghouse and national model within academe in general and Minority Serving Institutions (MSIs) in particular. In a relatively short time, MACH-III is already off the ground, with a committed staff of four and widening interests from scholars across the country who have turned to the Center and Bonner to help find research solutions for some of the nation’s most vexing problems.

“The MACH-III Center is a shining example of the impact an educational research center can have at an HBCU by providing international, national, state and local solutions to advancing our understanding of students of color in HBCU contexts,” says Dr. Chance W. Lewis, the Carol Grotnes Belk Distinguished Professor of Urban Education at the University of North Carolina Charlotte. “Dr. Bonner is doing outstanding work in elevating the educational scholarship in this area.”

Indeed, when Bonner announced in 2014 that he was leaving Rutgers University — where he held the Samuel DeWitt Proctor Endowed Chair in Education in the Graduate School of Education — to join the faculty at Prairie View A&M University, few expected that he would simply teach. The author of dozens of publications, Bonner developed a solid reputation as a research-practitioner and created several successful initiatives, including the HBCU Deans’ ThinkTank and a Black Male Summit.

Having held teaching and administrative stints at Texas A&M, University of Texas at San Antonio, Bowling Green State University and Centenary College of Louisiana, Bonner established his bona fides as a doctoral student at the University of Arkansas, Fayetteville back in the 1990s.

“I got my doctorate in higher education administration because I thought I’d become a vice president of student affairs,” says Bonner. “I had a really good adviser who said, ‘we’re going to do the Ed.D. program, but I’m still going to make you take every research course.”

That rigorous training has catapulted Bonner into one of the nation’s top thinkers on issues that affect African-American students. His research on African-American “gifted and talented” male students has expanded the field.

“Fred Bonner is a visionary scholar and leader whose work is reaching children of color, educators and families,” says Dr. Donna Ford, who holds the Cornelius Vanderbilt Chair at Vanderbilt University’s Peabody College of Education and Human Development. “It is rare and refreshing to see an HBCU have a center focused on gifted students. He is setting the bar for what equity looks like.”

Tammy Lane, a fifth-year doctoral student in Educational Leadership, remembers hearing Bonner deliver a talk on developing a research agenda and was excited to later learn that he was joining the faculty.

“When I heard he was coming on board, I said, ‘I’ve got to have him as my chair,’” says Lane, whose dissertation focuses on the experiences of LGBT students at HBCUs. “He has been a gift to our University and has given me that confidence I need to move forward.” 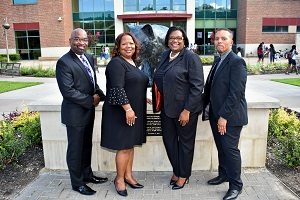 Bonner, whom colleagues describe as unusually energetic and driven, has been barnstorming the country, applying for grants and reaching out to potential funders who are interested in supporting the Center. The response, so far, has been encouraging. In addition, he and his staff have been providing ongoing presentations, lectures and roundtable discussions at convenings throughout the world, most recently in Paris at the International Centre for Innovation in Education, where he accepted the International Award for Excellence in Higher Education on behalf of Prairie View. In 2018, Bonner and MACH-III will host the international forum in Texas, the first time to be held in the U.S. and to be hosted by an HBCU.

“Dr. Bonner’s scholarship and by extension, his center, expands and redefines the term minority, in an effort to set the stage for engaged scholarship that speaks to the assets and potential inherent among populations of color and other marginalized groups,” says Hartlep. “Dr. Bonner’s asset-based research on people of color is important because it breaks away from the historically deficit-framed perspectives of diverse students, which often focuses on what these populations are not achieving or accomplishing.”

MACH-III’s continued expansion comes at an ideal time. Prairie View has recently been thrust in the national limelight in the wake of Dr. Ruth Simmons’ decision to come out of retirement to lead the 142-year-old institution. Simmons made history when she was appointed president of Brown University, the first and so far the only African-American to lead an Ivy League institution.

“Ruth,” as she prefers to be called, even by students “has been extremely supportive of MACH-III,” says Bonner, who like Simmons is a native Texan.

Bonner has also won over support from his colleagues at the university, including Dr. James A. Wilson Jr., associate provost for academic affairs and director of the Honors Program at Prairie View. He says that MACH-III represents the future of HBCUs.

“In theory, I don’t believe in silos. They don’t achieve the same kinds of goals if we were to maximize resources,” says Wilson, who has a successful track record of attracting top honor students to Prairie View, many of whom go on to study at elite graduate, law and medical schools once they graduate. “For me, the collaboration is a natural when you start with intellectual respect and I respect the work that Dr. Bonner is doing.”

No longer looking for validation

At a time when many scholars still face resistance for wanting to research and write about people of color, Bonner is creating a space for that work to be done, says Dr. Stella L. Smith, associate director of MACH-III.

“It’s nice for it to just be assumed that the work is important,” says Smith, who was a Postdoctoral Fellow at the University of Texas at Austin’s Longhorn Center for Academic Excellence before she began working for Bonner last year. “We still have to do good work, but not to have to have that battle is a wonderful thing about being in this space.”

“I feel like I’m needed here and appreciated here and the work is appreciated,” says Williams, who is supporting the efforts of the center by establishing a peer-reviewed research journal, which will highlight the research undertaken at the Center.

Lewis of UNC Charlotte says that other HBCUs should consider replicating Bonner’s model.

“I encourage other HBCUs to review this model and hire or promote from within high-impact scholars to create and lead these entities,” says Lewis, who is also director of The Urban Education Collaborative at UNC Charlotte. “These centers can bring significant resources and exposure to their respective institutions.”

For his part, Bonner remains steadfast in his desire to help move his research agenda.

“What has been the most exciting part for me is having this idea in my head and seeing it operationalized through not only programs and initiatives but through the people, and also building a team with people who are just as excited about this vision and mission toward the goal of creating this research center,” says Bonner.

This article appeared in the August 9, 2018 issue of Diverse