WASHINGTON – Trump administration education policies are hostile to civil rights and are intentionally dismantling protections intended to help students, and the efforts must be countered by voting and other civic involvement.

That was the overarching message of educators on a panel Thursday at the Congressional Black Caucus Foundation’s 48th Annual Legislative Conference at the Walter Washington Convention Center. 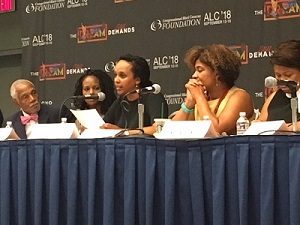 In an “education braintrust” session titled “Reclaiming Our Civil Rights: Combating the Administration’s Assault on Education,” speakers cited Justice Department rollback of Obama-era policies that offered guidance to schools on matters of equity and civil rights, as well as actions by Secretary of Education Betsy DeVos on issues ranging from special education disparities to sexual assault that reverse progress toward student well-being and educational equality.

“Things are every bit as bad as any of us imagined they might be with respect to education and civil rights,” said Catherine Lhamon, chair of the U.S. Commission on Civil Rights. “The strongest and most consistent message that we hear from this administration and the Department of Education is to undermine.”

The administration’s current review of guidance policies designed to reduce racially disproportionate discipline in elementary and secondary schools is one of many signs of “the scary precipice at which we find ourselves now,” Lhamon said. “We must make a way out of no way. We have to find a way forward because too much is at stake.”

The administration’s scale-back of efforts to stop predatory student loan practices hinders equal access and is essentially an assault on students, particularly minority, low-income, first-generation and other underrepresented students who rely most heavily on federal loans to pay for higher education, said Mary Cathryn Ricker, executive vice president of the American Federation of Teachers.

“It’s no secret that this administration has set in place serious and brazen” efforts to dismantle the education department and impede civil rights, she said.

Hundreds of teachers are running for public office around the nation this mid-term to keep the focus on civil rights and help the most vulnerable students, Ricker said.

“The AFT will not let progress fall backwards on our watch,” she said. “This election is a which-side-are-you-on moment.”

It’s important for citizens to understand the issues and to vote, several panelists said. It’s also a good time to “assess the damage done by the [Trump] administration in terms of opportunities for students of color,” said Monique Dixon, deputy policy director and senior counsel for the NAACP Legal Defense and Educational Fund.

Noting that the fund filed an amicus brief in support of Harvard University in a high-profile discrimination lawsuit being litigated against the school by Asian American students, Dixon and Fatima Goss Graves urged the public to be aware of when public-comment periods are scheduled for proposed revisions and rescissions of policies regarding civil rights issues in education and speak up.

That is particularly important in light of possible replacement of Obama-era guidance on sex assault involving students, said Goss Graves, president and CEO of the National Women’s Law Center. DeVos “put in interim guidance that kind of told schools, ‘Do what you want’ and sent a dangerous signal that you don’t have to do anything,” said Graves.

Karla Hernandez-Matz, president of United Teachers of Miami-Dade, said the education department should be less focused on efforts to “dismantle public schools” and more focused on major issues such as immigration rights, over-testing, underfunding and gun violence at schools.

“’Don’t you dare give a teacher a raise’” is the administration’s attitude, she said. “’Give them a gun. And buy them bullets.’”

Surveying the changes afoot, John Brittain, acting dean of the University of the District of Columbia School of Law, said it is important to resist educational oppression.

“The remedy to discrimination is under attack,” he said. “School segregation, like affirmative action, is wounded but it has survived.”

There was some discussion about where things are going well in education.

Lisa Ransom, chairwoman and CEO of the Augustus W. Hawkins Foundation, pointed to Trump recently signing a bipartisan bill that significantly strengthened funding and other support for new-millennium vocational and technical education.

“To be competitive, we must have a high-skilled workforce,” she said. “We need our students to have four-year degrees, but there are many paths to get there.”

With 17 career clusters in modern vo-tech education, and most of those clusters incorporating at least two components of STEM, there are more opportunities for HBCUs to reap some of the benefits for their students, Ransom added.

Lodriguez Murray, vice president of public policy and government affairs for the United Negro College Fund, ticked off a list of multimillion-dollar federal budget increases for HBCUs, Pell grants, college work-study, TRIO programs and other areas that will help underserved and underrepresented students.

Democrats in Congress Question DeVos on Relief For Defrauded Students