Mexican-American Professor Aims to Be ‘Agent of Ethnic Mobility’

She was born to a mother who left school after the third grade to work. Her late father attended school in a one-room adobe house in the mountains of Mexico but never finished.

But Dr. Glenda M. Flores is their dream realized. She’s not only a first-generation college graduate but a tenured associate professor at her alma mater — the University of California-Irvine — where several students are like her in so many ways.

“Honestly, I feel very blessed and grateful to have this group of students who are not just Latinos, but there are others who are first-generation college students,” she says. “I see in a lot of them this deep-seated desire to finish … you’re not doing it for yourself, but for a whole group of people who sacrificed for you.”

Flores earned two undergraduate degrees from UC Irvine: one in Spanish language and culture with an education emphasis and a second in Chicano and Latino studies. She later earned a Ph.D. in sociology from the University of Southern California and returned to UC Irvine in 2012 as an assistant professor. 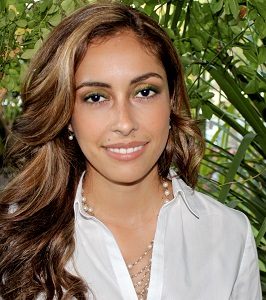 Many Latino students struggle with a sense of belonging in the university setting, says Flores, who is also the director of undergraduate studies.

“A lot of it has to do with the current political climate,” she says, adding that the immigration issue has become racialized.

Students can sense the anti-immigrant, anti-Latino and anti-Mexican sentiments, she says.

“They ask, ‘Do I really belong at this institution?’ and they do.”

Born to immigrant parents, Flores says she promotes a sense of belonging as a university professor.

In her classroom, students openly discuss the history of immigration in the U.S. and engage in robust discussions about historical racial hierarchies and how those hierarchies have changed across the years.

“We are in a certain historical era right now where these hierarchies are changing,” Flores says, adding that there’s a shifting in areas where only a Black-White binary existed. This shifting is happening because of the growing influx of Hispanics.

“I think that courses like those are so valuable,” she says. “They give different versions of history that some students aren’t really exposed to, but once they learn about it they can really resonate with the material.”

Flores, who once aspired to be a bilingual elementary school teacher, says that she feels like an agent of ethnic mobility,

Her book, Latina Teachers: Creating Careers and Guarding Cultures highlights some of the ways that educators can be agents of ethnic mobility at the elementary school level. It also includes best practices for how to best educate and communicate with young Latinos, particularly those in underperforming schools throughout Southern California.

For example,  certain words in Spanish  carry cultural codes, such as “mijo” and “mija” which mean son and daughter. Latina teachers can guard and protect their culture by continuing to use these terms, even though speaking Spanish in schools continues to be frowned upon in the U.S., she says.

She notes that institutionalizing these rhetorical speech devices is a way that teachers can create a connection with their students.

As a junior at UC Irvine, Flores enrolled in a multicultural education course that required field studies at elementary schools. There, she noticed a disconnect between teachers and students.

“I think that’s where I also started to see that some teachers didn’t completely understand where their students were coming from,” she says. She also witnessed the way other teachers would talk about parents, specifically the ones who were immigrants, behind closed doors, adding that some teachers would complain that the parents didn’t care because they sometimes didn’t show up for school meetings.

The criticisms were often unwarranted, says Flores, adding that many of the parents worked long days, and, had the teachers offered alternatives times, the parents would have come.

Flores’ father, who sold Chicklets and trinkets along the Mexican-U.S. border as a youngster, had the chance to see many of his daughter’s academic milestones before his death in 2010.

“He was always very supportive; he wanted me to be something like an astronaut,” she says.

Instead, she’s making an impact right here on Earth.

This article will appear in the October 4, 2018 edition of Diverse.

Training for the Ph.D.