Colleges and Universities Close Ahead of Hurricane Michael - Higher Education

Colleges and Universities Close Ahead of Hurricane Michael

Several colleges and universities across Florida, Georgia and the Carolinas announced closures ahead of Hurricane Michael which made landfall Wednesday and is expected to wreak havoc along the east coast.

Officials at Francis Marion University located in Florence, S.C. said they are monitoring the situation but won’t close the school as they did when Hurricane Florence passed through the area in September.  The storm presented problems for the university’s commuter students who was offered free on-campus housing so they could continue their studies, said Matt McColl, director of media relations at the public liberal arts university.

Gulf Coast State College in Panama City, Fla. is just miles from Mexico Beach Fla., where the storm officially came ashore. The campus is closed through Thursday; activities are canceled through at least Monday, according to the school’s website.

Northwest Florida State College (NWFSC) in Niceville, Fla., about an hour to the west of Panama City, is closed through Thursday.

On Wednesday morning, some 224 people were in NWFSC’s Raider Arena which was turned into an official shelter, according to a tweet from the college.

Officials plan to spend Thursday inspecting campus buildings to ensure they are safe for staff and students to return.

In a period where multiple colleges and universities across the country are on Fall Break, some institutions were able to simply extend the length of the break and have students return to campus once university officials deem the area safe.

For example, Georgia College and State University (GCSU) announced their campus closure on Tuesday morning and has extended Fall Break until Monday, Oct. 15 when the campus will reopen. The university has kept an ongoing weather announcement page with updated information for students and families, staff and the community can utilize throughout the duration of the storm.

Wednesday morning, GCSU officials announced that weekend dining halls will run on its normal schedule for students still in residence halls, but the campus transit won’t run unless otherwise noted.

“Again, we encourage students, faculty and staff to tune into local TV and radio stations for updates in your area. We want to stress the importance of personal preparedness,” the update said. “Remember, whether you live on or off campus, now is the time to prepare and ensure your safety for the coming days. Please visit Ready Georgia for additional information and resources for preparing yourself and your family.”

GCSU is one of 20 Georgia institutions closed for the hurricane, as well as 25 county public schools closed in the state, according to Atlanta Journal-Constitution and FoxNews-Georgia affiliate WXGA.

On Monday, Florida Agricultural and Mechanical University (FAMU) announced plans to deliver meals and water to students in their dorm rooms and to those taking shelter in its Foster-Tanner Music Building.

The building is open to faculty, staff, students and their families, according to the school’s website.

Florida State University in  nearby Tallahassee  opened a shelter at its Donald L. Tucker Civic Center for off-campus students and faculty, according to the school’s website. The shelter is not providing food and water and suggested people bring enough non-perishable items and water for two days. 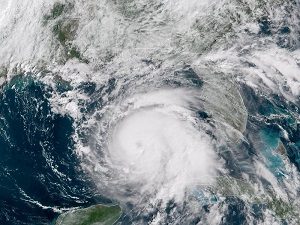 As of Wednesday afternoon, University of Florida officials in Gainesville said the school is monitoring the situation but didn’t plan to close its main campus.

North Carolina Governor Roy Cooper issued a State of Emergency for the state, encouraging civilians to evacuate if told to by emergency management officials.

In the announcement, Cooper said that restrictions on trucks and heavy vehicles have been lifted to help the state prepare for any impacts the hurricane may encounter and 150 National Guard troops were ordered to report for duty to be available for anyone who may need it throughout the duration of the hurricane.

More than 10 county public schools in the state are closed, but no North Carolina colleges and universities have made any closure or delay announcements as of Wednesday evening.