DUBLIN — The International Colloquium on Black Males in Education kicked off this week with pre-colloquium events, including a Graduate School Academy and a Black Female Forum.

Now in its seventh year, the weeklong international gathering has become the go-to place for scholars interested in examining some of the issues that impact Black men throughout the world.

Colloquium conveners Drs. Jerlando F.L Jackson of the University of Wisconsin-Madison and James L. Moore III of the Ohio State University (OSU) have been the driving force behind the annual convening, which included an inaugural Black Female Forum.

“Black females not only serve as thought partners for the International Colloquium on Black Male Education, they are our life partners, mothers, advocates and sisters in the struggle,” said Jackson, the Vilas Distinguished Professor of Higher Education and department chair for educational leadership and policy analysis at University of Wisconsin-Madison. “The working bond and relationship is essential to bridging the worlds of research and policy for a better tomorrow for Black males, Black females, Black children and Black families.” 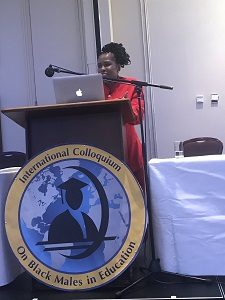 Dr. Tamara Bertrand Jones, an associate professor of education at Florida State University, facilitated the forum that included robust discussions about topics ranging from mental health, entrepreneurship, research and “what it means to engage in work on Black males” as Black women scholars “and to be in community with Black men.”

During a panel discussion titled “Impacting Black People, Schools, and Communities: The Role of Sisters of the Academy and Beyond,” Dr. Sharon L. Holmes said that scholarship about the Black community has to be accessible to those outside of the academy.

“I don’t want to produce material for the people who need it most but can’t touch it,” said Dr. Sharon L. Holmes, associate professor of student affairs administration at Binghamton University in New York.

At Tuesday’s lunch session, Major General Marcia Anderson delivered the keynote address and called for “action and not reaction” in addressing pertinent issues impacting the Black community, including how Black males are presented in the mainstream media.

Anderson — who was the first African-American woman to become a major general in the United States Army — retired from her post in 2016 after more than three decades of military service.

She said that even though African-Americans make up about 13 percent of the military population, high-ranking Black officials in the armed forces hover below 5 percent.

“Having low numbers make it that much harder for African-Americans to rise to great numbers in the military,” said Anderson, who added that young Black women and men should consider the military as a viable career option.

“Not everyone is carrying a weapon and blowing things up,” she said, noting that the United States military is a “large institution with a global reach.”

“This is about developing relationship and impacting our foreign policy,” said Anderson who has been on a mission to diversify the armed forces. “It takes over 20 years to create a General or Admiral so we have to think and act strategically.”

Dr. La Var J. Charleston leads the Graduate Academy at the International Colloquium on Black Males in Education, which is meeting this week in Dublin, Ireland.

Nearby, Dr. Sherri Ann Charleston, assistant vice provost in the Division of Diversity, Equity and Educational Achievement at the University of Wisconsin-Madison, spent Tuesday providing tips to a group of undergraduate students about how best to navigate the admissions process for graduate and professional schools.

The Graduate Academy, which Charleston runs at the Colloquium each year with her husband, Dr. LaVar J. Charleston, the assistant vice chancellor of Student Diversity, Engagement & Success at the University of Wisconsin-Whitewater, has operated as a bootcamp and helps students understand the rigors, commitments and expectations associated with pursuing an advanced degree.

“Keep in touch with your professors, continue those relationships,” said Sherri Ann Charleston, who urged the students to seek internships and other professional opportunities to prepare themselves for opportunities like becoming college professors.

“We need to diversify the professoriate,” she said.

Nnaemeka Anene, a fourth-year student at OSU, said that the opportunity to not only present his research but to commune with other young Black scholars in Ireland has already been a life-changing event.

“It has been really eye-opening,” said Anene, 21, an engineering student from Dayton, Ohio.

He has aspirations of going on to business or law school once he graduates.

“Being in another country and to meet so many people has been an amazing opportunity,” he said. “There is just so much to learn.”