Dr. Allyson Hobbs comes from a family of storytellers, perhaps chief among them her Aunt Shirley.

It was Shirley Kitching’s fascinating stories shared during holiday and summer visits to Chicago – particularly one about an ancestor who was sent to the West Coast to live her life as a White woman by “passing” – that influenced Hobbs’ decision to become a historian and author.

Now Hobbs, an associate professor of American history and director of African and African-American Studies at Stanford University, spends a lot of time researching historical people, places and phenomena and bringing those stories to life for the public – the same way Kitching and other relatives did for her. 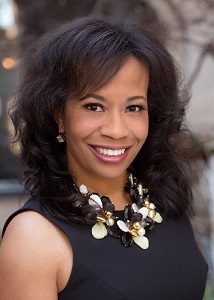 “I think what I find most compelling about it is, students are really eager to understand history because they’re trying to figure out their own place in the world,” says the New Jersey native. “They have questions about why things are the way they are today, what happened in the past to get us to now and are trying to look to history for some answers to their questions.”

“Let’s just say, it certainly wasn’t my forté,” she recalls. “I felt like I wanted to do something a little more creative and a little more in the humanities.”

So she worked at an advertising agency for a couple of years and liked it but realized that she “wanted something more that would give me a chance to learn and read and write.” Her thoughts turned to what she enjoyed most in college – researching and writing her senior thesis on the Highlander Folk School in Tennessee, which was involved extensively in labor and civil rights organizing.

That experience, combined with some projects at the ad agency that allowed her to again enjoy reading and research, prompted her to go back to school. She enrolled in the University of Chicago and earned a Ph.D. in history, graduating with distinction.

Since childhood, Hobbs had longed to understand the interesting histories and experiences of her African-American parents, who grew up in Chicago, and their parents, who relocated to the Windy City from the South during the Great Migration. As a budding historian, the lens through which Hobbs would view their lives and histories would be Chicago itself.

“You have to understand Chicago to understand African-American history,” Hobbs contends, noting its longtime centrality to Black culture.

And that, along with one of Aunt Shirley’s stories, is what led to research and ultimately an award-winning book about the racial phenomenon of passing – when very light-skinned and European-featured Black Americans secretly pass themselves off as White people. Published in 2014, A Chosen Exile: A History of Racial Passing in American Life explored the history of passing in the United States from the 1700’s to current times.

At Stanford, Hobbs teaches courses on American identity, African-American history, African-American women’s history, twentieth-century American history and culture, and American road trips, migration, travel and mobility. She has won several teaching awards, including the Phi Beta Kappa Teaching Prize, the Graves Award in the Humanities and the St. Clair Drake Teaching Award, and has received fellowships from the Ford Foundation, Michelle R. Clayman Institute for Gender Research and the Center for the Comparative Study of Race and Ethnicity.

In addition to contributing writings to NewYorker.com, Hobbs is working on her second book. Far From Sanctuary: African American Travel and the Road to Civil Rights documents the multiple ways that cars shaped the lives of generations of African-American motorists on the road. Hobbs has been traveling to Southern towns, gathering information about how an economic triumph for many Black people became a literal vehicle for trauma and tragedy.

As important as reading and searching archives are to a historian’s work, Hobbs says, it’s just as important to travel and talk with people personally.

“That’s really what makes history so important and so meaningful, because it really does sort of expand your thinking and open your eyes to different experiences,” she says. “And it’s important to listen. When someone shares their story with you, that’s a really powerful and generous thing for them to do.”

The lessons that history teaches are important, Hobbs adds, quoting the maxim that history may not always repeat itself but it often rhymes.

“Understanding of the past will allow us to make a better future, make better decisions, try to be more inclusive and more tolerant than what we were,” she says. “And it will help us understand other peoples’ experiences, too, allowing us to be better people, kinder people, more empathetic.”

This article will appear in the November 1, 2018 edition of Diverse.