Venture capitalists and elected officials joined Claflin University students, administrators and others to discuss how historically Black colleges and universities (HBCUs) are preparing their students for entrepreneurship and careers in technology. 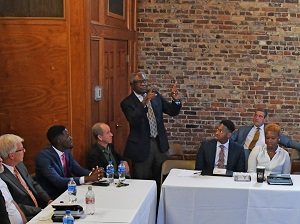 The visit to the university in Orangeburg, South Carolina was one of many stops in the “Comeback Cities Tour South” organized by Representatives James Clyburn D-SC, Tim Ryan, D-OH and Ro Khanna D–CA. Many of the visiting venture capitalists hailed from Silicon Valley in California, while others came from New York and Chicago, officials said.

“We greatly appreciate Congressman Clyburn and Congressman Ryan spearheading the delegation’s visit to Claflin,” said provost Dr. Karl S. Wright. “It is very significant that these investors and elected officials now realize the entrepreneurial capacity of Claflin and other HBCUs. The combined efforts of our administrators, faculty, students and alumni could be the catalyst this region needs for sustainable economic growth.”

A United Negro College Fund study found that Claflin generates $79 million and provides around 835 jobs to the surrounding region. Altogether, South Carolina’s eight HBCUs have a combined economic impact of $463 million on the state’s economy.

Additional “Comeback Cities Tour South” stops will include Charlotte, Columbia and Atlanta so that the group of investors can visit the HBCUs in these cities, said Clyburn.

“I am convinced a lot is going to come out of this tour and the conversations they are having on these HBCU campuses,” he said.

Roy Bahat, head of Bloomberg Beta, said the group met several “incredibly promising” recent graduates who may be good candidates for some of the companies he works with.

“Technology has become a global profession and our conversations with Claflin students are the same we hear on an elevator in San Francisco,” he said. “We are learning that people have different life experiences and we need to take that into account when creating connections with Silicon Valley and schools like Claflin.”