University of Massachusetts (UMass) students, faculty and community members participated in a campus walkout on Wednesday outside of the Student Union to peacefully protest against the recent rise of White supremacy and “right-wing” terror present across the nation.

Around 50 people participated in the walkout, which was hosted by the new student organization UMass Students United Against Fascism in addition to some members of the International Socialist Organization at UMass. 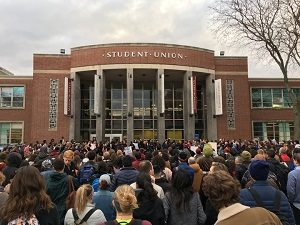 UMass students, faculty and community members at the campus walkout in front of the Student Union.

Those who participated in the walkout held signs with slogans that read:“Which side are you on?” and “We are UMass” and used the gathering to voice their opinion on the country’s current political climate and what is needed to fight systemic oppression and bigotry in the age of the Trump Administration, according to The Massachusetts Daily Collegian.

Last week, UMass’s student dormitory Melville Hall was vandalized with markings of a square with two Xs across it.

Students also used the walkout to discuss recent issues regarding racial discrimination and violence, such as President Trump’s recent ‘Caravan’ ad and the Pittsburgh synagogue shooting.

“Even though we may have not accomplished everything that we wanted to, it’s not over, not by a long shot and that everyone is of value,” said Britt Mardis, a sophomore psychology major at UMass. “I think that there is nothing that cannot be accomplished by human beings loving each other and treating each other with respect and fighting for everyone’s dignity.”