A new partnership between a Pennsylvania university and a Native American tribe aims to increase cultural awareness among students and establish a new curriculum at the institution.

East Stroudsburg University (ESU) and the Delaware Tribe of Indians signed a Memorandum of Understanding in September. ­

The university, located in a city with its namesake, is in eastern Pennsylvania near the New Jersey border. ­The agreement is a great fit, given that the 258-acre campus location is at the heart of the Delaware tribe’s original lands. 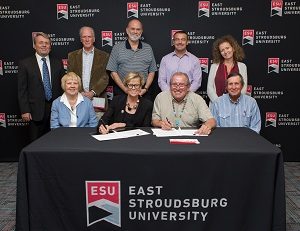 ESU and Delaware Tribe of Indians sign Memorandum of Understanding.

ESU is one of only two universities in the nation that partners with the Delaware Tribe of Indians. ­The other institution is Emporia State University in Kansas.

­The university hopes the partnership will one day create scholarships at East Stroudsburg for members of the Delaware tribe, providing an opportunity for them to study in their ancestral homeland, says Dr. Joanne Z. Bruno, ESU’s provost.

Over time, most of the tribe has left their original lands. About 11,000 tribe members now live in Kansas, Texas and Oklahoma, the tribe’s headquarters, according to Dr. Brice Obermeyer.

­Those working on the partnership say that Native students would naturally be drawn to a university they know is sensitive to their cultural needs.

“Talk about going home,” says Bruno. “It means so much that the university could nurture that environment.”

Before the partnership, university administrators had not, in a consistent and overreaching way, made a commitment even to the land they stand on, she says.

The agreement between the school and the tribe provides an opportunity for the inclusion of students with Native American ancestry to contribute to the enrichment of ESU’s curriculum, school administrators say.

“The educational potential for our younger students at East Stroudsburg is just huge,” says Bruno. “We are committed at ESU to a diversification of our community starting with our students and going to our faculty and staff.”

Susan Bachor, an archeologist for the Delaware Tribe Historical Preservation Office, now has work space in the center of the campus’ main building. She also has five student interns and will teach Native American-themed classes in the spring.

“It’s a wonderful opportunity to bring the awareness that the Delaware people are still here,” Bachor says. “­They still exist, they are not in a long-lost history book; these are groups of people who still live inside the United States.” 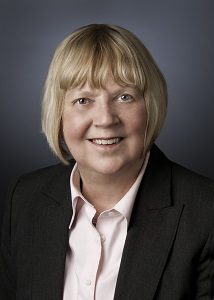 “With Susan [Bachor] being onboard, it is really coalescing this commitment to preserving the rich cultural heritage of the people who founded this land,” says Bruno.

Bachor had sought a partnership with a university for many years, partly because the energy of campuses makes them a perfect space to learn and gather information from geography and history professors, the people she often turns to for research assistance.

ESU students are already being introduced to Lenape, the native language of the Delaware people.

Bachor posts a Lenape “Word of the Week” on her door for passersby to see.

A Lenape word pronunciation contest for students will be held in honor of Native American Heritage Month, Bachor says.

Lenape was in danger at one time of becoming extinct as the older Native speakers began to pass away, Obermeyer said. Preservationists stepped in and helped save the language by created Lenape classes and a Lenape dictionary.

The partnership’s beginning is serendipitous; it came about when Douglas Lare, a professor of professional and secondary education at ESU, mentioned to his neighbor that he had a Ground Penetrating Radar (GPR) machine but didn’t know how to use it.

His neighbor was to attend an archeological meeting, so Lare asked him to see if anyone there knew how to operate the machine.

Bachor happened to be at that meeting and she knew how to use the GPR. Lare and Bachor’s meeting and subsequent work together led to the partnership.

Bruno says she is impressed with how faculty worked so diligently on the partnership.

“­They didn’t drop the ball for a moment on this. I am amazed at how quickly we got from initial discussions in early spring to closure and an official signing in September,” Bruno says of the work done by Lare and Dellipriscoli.

The Delaware tribe is classified as a sovereign nation, and partnerships with universities are some of the most stable relationships those nations can have, says Bachor. Tribal sovereignty ensures that any decisions about the tribes with regard to their property and citizens are made with their participation and consent, according to the Department of the Interior. ­

The partnership could help students get jobs, in not just liberal arts but in other fields as well.

“We have one student who has a medical background; she wants to go work with Alaskan natives. ­This cultural work she’s doing with me is supplementing the work she’s already done in history and in the medical field,” says Bachor.

Bachor has already been awarded a historical preservation grant by the National Park Service to survey Delaware sacred sites in Oklahoma; she hopes the tribe can use some university equipment for the project.

“Hopefully the students will be able to come out [to Oklahoma] and do that alongside tribal members and elders as we look at these sacred sites,” says Obermeyer.

Sacred sites can be di cult to identify without GPR, which offers a nonintrusive way of finding these very sensitive sites the tribe doesn’t want disturbed, he says.

It benefits the tribe and the students by providing them real-world experience, he adds.

“Our theme is, ‘students first,’ that’s why we started the partnership because we wanted to get students involved in awareness and internship,” says Lare.

ESU working alongside the tribe fits well with the element of the university’s strategic plan that focuses on community involvement, says college officials, adding that the partnership demonstrates that the campus is bigger than the land on which it sits.

“We are a campus without borders,” says Bruno.