After Tuskegee University (TU)’s most well-known campus landmark, the Booker T. Washington Monument was renovated in April, the small-scale model of the sculpture is now being remodeled. 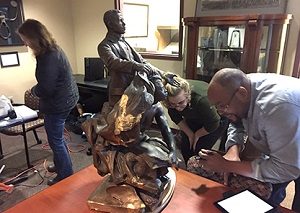 Since the monument was placed on the campus in 1922, the statue had gathered tons of layers of grime, tree sap and other impurities, according to a Tuskegee release. Provision Contracting Services LLC of Tuskegee volunteered to help clean and restore the landmark by pressure-washing followed by waxing it.

The Booker T. Washington Monument sculptor, Charles Keck first designed a small-scale model of the monument before designing the statue. Before it was moved to the TU Archives, it was damaged as a result of mishandling, improper storage and restoration attempts.

Birmingham Museum of Art preservationists has offered to help restore the maquette and will do so in their buildings throughout the next year, the release reported. Once restored, the small-scale model will reside in the University Archives.