Zombies in the Academy - Higher Education

This year’s Association for the Study of Higher Education (ASHE) conference was exciting for me for two reasons. First, the theme “Envisioning the Woke Academy,” was brought to life by two scholars whom I admire, Drs. Lori Patton Davis and D-L Stewart. Second, this was my first ASHE conference. As a second-year doctoral student in the Higher Education Leadership program at Colorado State University, I could not contain my enthusiasm to hear from the same scholars I read in class — those who have helped me expand my critical thinking and knowledge base. Their scholarship has allowed me to imagine that one day I would produce similar scholarship that interrogates forms of inequities and White supremacy in higher education. I arrived in this space excited to learn from the work others in my field have contributed.

I began the conference by attending the Newcomer Orientation Lunch; I then headed to my first session of the day. Given that the concept of free speech is a topic that I am currently exploring for my dissertation research, the first panel that I attended was based on this theme. In my own work, I specifically utilize a critical lens to the topic of “free speech.” Thus, I excitedly took my notebook to the scholarly paper session titled Powerful Words, Campus Free Speech, and Institutional Response. After the chair introduced the session, the first paper, Campus Free Speech: When Your Woke Policy is White Supremacy, was given by two researchers, an assistant professor and a graduate student. I was curious to hear the perspectives from two White researchers and their examination of White supremacy as “woke policy.” As I listened intently, I soon found my chest tighten and my heart beating rapidly as the presenter read their first vignette aloud. She began to share an encounter of a “young Latina” and a representative from the Foundation for Individual Rights in Education (FIRE), who was not described in any detail. She ended the vignette by claiming that she debriefed with both individuals. I sat in the audience in shock as I heard my critiques and sentiments come out of her mouth. I was the Latina she used in her “research”. She referenced a free speech plenary at the NASPA (Student Affairs Administrators in Higher Education) conference in March of 2018. There, I questioned if defending hate speech at the expense of students experiencing harassment, being doxxed, being outed and even experiencing violence could be a value congruent with goals of inclusion. Afterwards, the graduate student stood by and observed my conversation with the representative from FIRE. She presented this “data” as an auto-ethnography — data presented from a White woman’s perspective without my knowledge or consent. 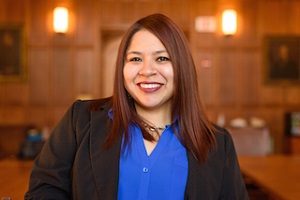 Even after weeks of replaying this event, I still do not feel that I have the proper words to describe this ethical violation and my physical reaction to this indignation. My heart raced, my breathing felt heavier, and I had an inability to concentrate on the rest of the presenters. These were some of the same physical reactions I had at the NASPA plenary. Once the Q&A forum opened, after being recognized to ask a question, I said, “I apologize in advance. I came here because I am interested in the topic. I didn’t know that I would come here and be triggered by the first paper. You see, I am the ‘young Latina’ you spoke about.” I then went to question how these researchers could claim to interrogate White supremacy while stealing my words and my pain, as a Brown woman, without my knowledge. This is not what I imagined when Dr. Patton Davis challenged us to “envision the woke academy.”

The assistant professor remained quiet. The graduate student apologized and stated that she felt I was not heard when this event happened. She admitted that it was my experience that motivated her to write that paper. Ironically, she also mentioned that more communication needed to happen, thus, her paper. I reminded her that she failed to communicate with me. But this sort of erasure — of people of color becoming a mere subject matter — is something that happens all too often in the academy.  What is ironic is that this woman critiqued White supremacy in her paper, and did not recognize that she and her co-author upheld White supremacy by co-opting my narrative. All the while showcasing questionable ethical standards of her research.

Let me make this clear, there are ways that these researchers could have approached this differently. At the very minimum, they could have communicated with me. However, the graduate student chose to be a voyeur in a moment of my life experience; she determined that she could benefit from it. This was an experience that I preferred not to relive. The authors used the guise of “wokeness”— yet, they racialized me in the vignette without naming the race of the other person, and once again, perpetuated whiteness as the standard and “unmarked” category. With these things at hand, I was faced with the choice of either revealing my identity and sharing what I did not want to share, or allowing these researchers to completely take my agency and voice away. Knowing that the stories and lived experiences of people of color, especially, women of color, have been and continue to be raided for consumption, I chose to speak up.

Later that day, Dr. Patton Davis gave her presidential remarks where she described the zombification of the academy. She described this as the actions that lead researchers to seek self-promotion. They do this by “walk[ing] aimlessly,” they “stay distracted by noise & spectacle,” and “feed off the living” (Patton Davis, 2018). It is clear that the authors were zombies in this scenario. They saw my experience as a spectacle, and they attempted to feed off of my lived experience to benefit their own academic accolades.

Since this incident, I have asked myself how something like this could happen, and why. While I never questioned my right to be in that room, the authors never imagined that the “young Latina” would be in the same academic space as themselves. Therefore, they failed to do their due diligence. As a result, in the same way that I found myself frozen when they shared the vignette, I am certain that they too experienced shock when I spoke up. Although, I have found resolution in Dr. Patton Davis’ assessment that the word “woke became the image of a struggle without having to do the work” (2018). In an attempt to capitalize on “woke polic[ies],” the authors failed to do their own work as they reproduced white supremacy.

The truth is, no one arrives at a state of wokeness. If you believe you have reached a woke status, then you have failed to realize that the work is continuous and interruptions in how we sustain systems and practices of inequity must continue. I am also aware that these systems are maintained by the participation of marginalized people. In this case, I refuse to become another story or voice to be framed in need of saving by others. I recommend that the authors take a similar approach. Do the self-work that you need to do and do not make other women of color remind you of that. Try to save yourselves next time and give us the space to tell our own stories.

Eileen Galvez is a second year doctoral student at Colorado State University and an assistant dean at Yale University.