Madeline Tondi found her passion for filmmaking at California State University, Los Angeles, where the undergraduate program she is on the verge of completing has received a large grant to increased diversity in the industry and advance film as a vehicle for social change. 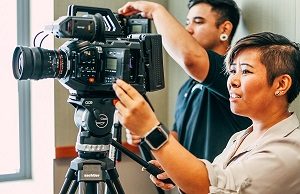 More than 500 students are earning a bachelor’s degree in television, film and media studies.

“Our school largely gets first-generation and working-class students and students of color, and it’s always been hard for them to embrace their own stories,” said Dr. John Ramirez, a professor and the department chair for 30 years. “This program empowers them to do that.”

Tondi is an example.

When the New Jersey native arrived at the school, she knew she wanted to study theater and photography but wasn’t excited about many of the monotonous technical aspects of the field.

But during her sophomore year in 2017, a new undergraduate course titled Community Impact Media brought her opportunities to direct. Last year she directed her first film, “Uncaged,” a documentary about a Cal State initiative in which education students go to the only state prison in Los Angeles County and instruct inmates who are working toward a bachelor’s degree – even though they are serving life sentences without parole.

The 10-minute documentary, on which she collaborated with six classmates, won an award of excellence in the short student documentary category from the Hollywood International Independent Documentary Awards last June. It will be among winners feted in March at an award ceremony.

“Because of this program, I became interested in making and producing documentaries,” said Tondi, a senior. “None of the classes or experiences I had before the Community Impact Media class made me want to be a filmmaker. After that, it felt more like a purpose than an interest.”

The course, offered every semester to up to 24 students, was created to support opportunities for them to connect with and spotlight the work of local nonprofits and other community-based organizations at a time when it had become difficult to develop and sustain such relationships, said Rodriguez.

Heather Fipps, a graduate of the bachelor’s program and the school’s master of fine arts program, became an assistant professor in the department in 2017 and leads the Community Impact Media course and the university’s Student Production Unit. She had a connection to the Hauser & Wirth gallery in Los Angeles, which became a course partner and collaborates on events at the gallery and on campus.

The diversity of students in the program reflects the cultural diversity across the CSU system, a key strength of the program, Fipps said. Students vary by age, race and gender and include first-generation, low-income and transfer students, she said, adding that 70 percent are first-generation and the majority are women. 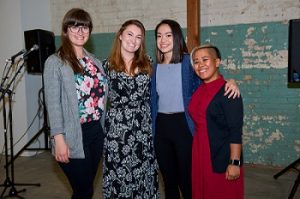 “The conversations and discussions that we have in class are certainly from many voices, and I think that’s so important in a learning environment,” she said. “The students are inspiring to be around and they have clear ideas. They take it very seriously and give it their all.”

The grant is “incredibly valuable” to the school’s commitment “to having the resources students need to get their education and graduate in the time they need” and improving their opportunities for upward socioeconomic mobility, she said.

The collaboration between the program and the gallery “has really tapped into something special,” added Fipps. “The relationship has grown and grown and is just going to be transformational for our program. Students are engaged because it’s hands-on learning, and it’s topics and communities they care about.”

A commitment to public service, civic engagement and community activism is encouraged in film students and the work they create, particularly in the Community Impact Media course.

“Some of the department’s best work is coming out of that class,” said Ramirez. “It has raised the bar. They get a professional and real-world filmmaking experience from beginning to the end. It lets them spread their wings and show what they can do. There is and always has been a demand for community connection, and students are committed to their communities. It’s a natural draw for our students and who they are and what their priorities are.”

Tondi, who expects to graduate this spring, said she wants to expand “Uncaged” and hopes that the documentary will be a catalyst to spread the inmate education initiative to other state prisons – and perhaps lead to the release of participants who demonstrate that they have changed.

Were Fipps not intentional about allowing students to determine the types of film projects they will produce, student outcomes probably would not be the same, said Tondi.

“This program made me want to become a filmmaker. It feels like an obligation now to the community.”

What About Cheyney University? We Rose First!