WASHINGTON – Despite disagreement about whether there’s a free-speech crisis on American college campuses and, if so, to what degree, there are public concerns about free expression that should be addressed, according to a panel of experts assembled for a discussion Monday by the Bipartisan Policy Center.

“We do need to be attentive to the cases that exist when we end up in a situation where there really is sort of an enforced way of thinking on any set of issues and students feel oppressed, truly unable to fully express their identities,” said Eric Fingerhut, president and CEO of Hillel International and a former Democrat Congressman and chancellor of the Ohio Board of Regents. 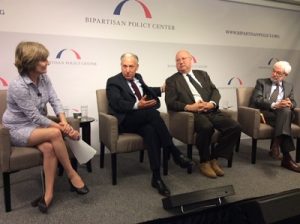 Fingerhut participated in a panel discussion titled “Crisis on Campus: The Future of Free Expression and Intellectual Diversity.” It was the inaugural event of the Campus Free Expression Project, a new BPC initiative to address political polarization by supporting development of independent thinkers in the next generation who are capable of civil civic debate.

The panel, moderated by project director Dr. Jacqueline Pfeffer Merrill, was planned prior to President Donald J. Trump’s issuance last week of an executive order intended to pressure colleges and universities to protect free-speech and free-expression rights of students and faculty.

Although Trump referenced instances of bias and violence against students with conservative positions, panelists noted that speech and expression on the ideological left and right have been suppressed.

Sometimes, panelists said, students self-censor out of fear of repercussions from teachers or other students who have expressed an opposing political perspective, pointing to a lack of wide intellectual diversity on some campuses.

“There is a crisis, but not the one most people are describing,” said Sanford Ungar, director of the Free Speech Project at Georgetown University and president emeritus of Goucher College. “It goes across the political spectrum. There are deplorable instances of serious speakers being shouted down.”

Fingerhut said he sees a crisis and has been surprised by the amount of time he spends dealing with university administrators about their campus climates and freedom of expression, usually regarding religion and faith.

While some problems related to freedom of speech can be easily and quickly addressed, such as speakers on campus being shouted down by protesters, Fingerhut said, ensuring freedom of association for those who don’t share a school’s philosophy gets to “a harder question” of ideological diversity that is particularly challenging for the Jewish students he represents.

On some campuses, the perspective that Zionism should be banned or defeated rather than studied and discussed is so prevalent that it intimidates Jewish students and others, excludes them from some campus organizations and activities, and discourages them from openly sharing their views, said Fingerhut.

“It can result in censorship of student behavior so they can’t fully engage in the life of the campus community,” he said.

Dr. Steven Hayward, a BPC Fellow and senior resident scholar at the Institute of Government Studies at the University of California, Berkley, said suppression of free speech and expression is “slow-moving but getting more severe.”

“The campus atmosphere has always tilted left,” Hayward said, and now there is “a climate of censoriousness that has gotten worse and continues to get worse.”

“The censoriousness of the left has intensified,” he said, adding that in some cases campuses are in danger of becoming “politicized cesspools.”

However, none of the panelists felt Trump’s executive order would help advance free expression at colleges and universities.

Hayward said similar threats have been made in the past, but they never were acted on.

There are better ways to promote intellectual diversity and engagement than withholding funds, which Congress may vigorously oppose, anyway, panelists said.

But if serious concerns about suppression of free expression on campuses are as widespread as they appear to be, warned Fingerhut, student choices about where to attend school will be affected.

“The market will have something to say about this,” he said.

Saying that a lack of intellectual diversity is a complicated problem on many if not most campuses, Unger said the question is how to address it.

He and the other panelists agreed that examples of civil discourse must be modeled while avoiding name-calling and baiting those with opposing views.

“It’s not modeled in national politics, which is really a shame,” said Unger.

Fingerhut said ensuring diversity of viewpoints can be achieved not just through instructors, but via programming, guest speakers and “investing heavily” in instructor training and pedagogical techniques.

“We have to be attentive to the fact that if, as a result of the natural academic processes, we find ourselves in a position that a train of thought is not being represented on campus, we should take steps to make sure it is represented,” he said.

Unger recommended that students take a broad range of courses, particularly across the social sciences, beginning at an early age. At the same time, he said, schools should hire instructors “with a record of engaging in debate, of being interested in other points of view.”