Due to a newly announced $6.9 million investment from the Chan Zuckerberg Initiative (CZI), the University of California at Berkeley and the University of California at San Diego (UCSD) will enhance their efforts to successfully recruit, retain and graduate more underrepresented students in the fields of science, technology, engineering and mathematics.

The CZI investment will support a partnership between the two California institutions and the University of Marlyand, Baltimore County’s Meyerhoff Scholars Program, an initiative that has served as a national model for placing underrepresented students on the path to terminal degrees in STEM fields. Grant funding will support UC Berkeley’s STEM Scholars Program initiative and UCSD’s PATHways to STEM through Enhanced Access and Mentorship (PATHS) Program.

“Over three decades, UMBC has developed highly effective strategies to support student success and increase diversity in STEM fields,” said Dr. Michael Summers, the Robert E. Meyerhoff Chair for Excellence in Research and Mentoring and Distinguished University Professor at UMBC. “It is truly thrilling to think about the national and global impact the Meyerhoff Scholars Program will have through partnerships like this. UC Berkeley and UC San Diego are among the top U.S. producers of undergraduates who go on to earn STEM graduate degrees, and by working together we can help shape the future of our national Ph.D. pipeline, with inclusive excellence as a core shared value of our work.” Keith Harmon, director of UMBC’s Meyerhoff Scholars Program, said after program leaders met with officials in STEM and diversity at both institutions, they felt that the adaptation of the program would be a “good fit.” Significantly, UMBC’s guiding efforts are to help UC Berkeley and UC San Diego sustain their programs long-term so that they become “integral, key components of the fabric of their institution,” Harmon said.

Harmon added that UMBC officials will train and equip UC Berkeley and UC San Diego leaders with strategies around how they established the Meyerhoff Scholars Program, built the program’s endowment, work with and pull in an interdisciplinary group of UMBC faculty for student mentoring and coaching and help students understand the culture of STEM. This will include sharing best practices for student success in undergraduate STEM education and how leaders can also support students in their research experiences and throughout their graduate admissions process, Harmon said.

The Meyerhoff Scholars Program has previously worked with other institutions to replicate its model for student preparation and support in STEM. Replication efforts resulted in the creation of the Chancellor’s Science Scholarship at the University of North Carolina at Chapel Hill and the Millennium Scholars Program at Pennsylvania State University.

The expansion to UC Berkeley and UC San Diego are noteworthy due to the schools’ proximity to Silicon Valley and for the UC System’s overall status as the largest educator of underrepresented and low-income undergraduate and graduate students among Association of American Universities institutions.

“California’s openness to new ways of thinking is what has made this state an innovation engine for the world, and the University of California has played a crucial role in that as one of the largest and most diverse public research universities in the country,” said Chan Zuckerberg Initiative co-founder Dr. Priscilla Chan. “With these new grants, we hope to help bring even more diversity of perspective and experience to our state – and to Silicon Valley.”

Data available from the Pew Research Center indicates that 69 percent of U.S. STEM workers are White, while Asians make up 13 percent, African-Americans make up 9 percent and Latinx make up 7 percent of the workforce. 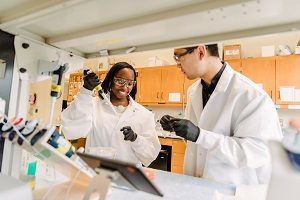 Thanks to the CZI grant, UC Berkeley chancellor Dr. Carol Christ said the STEM Scholars Program will go “hand in hand” with the institution’s commitment to a more diverse and inclusive culture across the campus.

“This program will enable Berkeley’s continued success as an engine of social mobility and a source for the next generation of top talent to such industries as Silicon Valley,” she said.

And at UC San Diego, the new partnership with CZI is a “welcomed addition” to existing efforts to increase and retain underrepresented groups in STEM at the university, said chancellor Dr. Pradeep K. Khosla.

The pilot PATH Scholars Program – created and led by Dr. Gentry Patrick, professor in the Neurobiology Section of the Division of Biological Sciences at UCSD – has already begun to provide targeted support to underrepresented students. Selected first-year students receive a four-year scholarship, personalize advising, ongoing peer, faculty and STEM alumni mentorship and exposure to the STEM industry through engagement with STEM leaders and industry partners.

Much of the work to prepare underrepresented students in STEM is centered on normalizing the notion that failure is a part of success, and also upholding the “espirit de corps” – a sense of collaboration and community, Harmon said.

At UMBC, Harmon tells Meyerhoff Scholars, “We can do it and we can do it together, and we’re going to do it in an environment that’s not cutthroat. We’re going to be collaborative. There are more than enough positions out there for all of us. We don’t need to hold others back; we need to lift all ships here.’”

“Those are the kinds of things we want them to remember and carry forward with them,” Harmon said.

How Faculty of Color Hurt Their Careers Helping Universities with Diversity

Students of Color Near 74 Percent of U. of California’s Fall Freshman Class