After a Storied Career, Dr. Les Wong is Readying Himself for Retirement - Higher Education

Dr. Leslie (Les) E. Wong’s career in postsecondary education has allowed him to meet more people than he could possibly try to count, but a poignant encounter with one particular high school student in Michigan has never strayed from his mind. 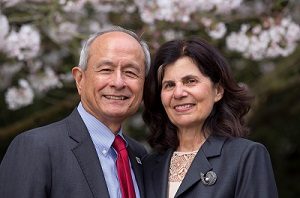 While serving as president of Northern Michigan University – in a region where nary an Asian American resides – Wong was lingering at a civic gathering in Detroit where he had already given remarks about major endeavors at his institution when the student of Asian descent approached him.

The young man told Wong that he planned to enroll at Northern based solely on the fact that its president “looked like him,” Wong recalls. ­

That moment, cemented when the student’s parents joined their son to meet Wong, is among the most indelible of his career, which spans the better part of five decades. He didn’t forget the teen’s declaration, either, after he and his wife, Phyllis, packed up to move west so he could take the top job at San Francisco State University in 2012.

Now that Wong, who’s scheduled to step down from the presidency in late July, is packing for yet another cross-country move, he still hasn’t forgotten the young man’s touching comment.

“I mean, it is one thing when an African-American child touched Barack Obama’s hair,” Wong says, “and got excited because he discovered that our country’s president has hair like his. It’s entirely different to think that a student as high achieving as the one in Detroit, who could attend any university of his choosing, had made his decision based on which university was led by someone who looked like the student.” ­

That encounter in Detroit moved Wong deeply, but it’s fair to say it rarely pops up in press interviews. In fact, a longtime Diverse correspondent only learned of it several years ago while covering the annual conference of the Asian Pacific Americans in Higher Education (APAHE), where Wong is a frequent participant and panelist. A conference organizer recounted the anecdote in front of Wong, whose eyes watered.

It’s far from the only memory that Wong, 69, will take along when he officially retires from SF State and moves with his wife to Worcester, Massachusetts, to live closer to their three grown sons and eight grandchildren.

Another memorable aspect of Wong’s career lies in the unsettling statistic of 1 percent. ­That is how few Asian Americans and Pacific Islanders (AAPIs) combined occupy U.S. college presidencies when examining percentages across all racial and ethnic groups. ­This stat of 1 percent is not only current, but it was identical for all intents and purposes 30-plus years ago, too. Over the years, Wong and other incumbent and former AAPI presidents have told Diverse that their scarcity is tied in part to the so-called bamboo ceiling, a misconception that Asians aren’t assertive enough for leadership.

As he transitions toward retirement, Wong insists that he will continue mentoring AAPIs within academia as part of a long-running struggle to form some semblance of a career pipeline into college presidencies.

“I’ve got 10 mentees who were afraid that I was going to disappear after this summer,” he says. “All of them are on the cusp of becoming a president or vice president, and I have promised that I’ll still be available to them.”

He adds with a laugh, “­This isn’t the Lone Ranger simply leaving behind silver bullets.” ­

That’s quite a commitment from someone who could easily claim burnout based on a resumé that, in addition to seven years presiding over SF State, includes the eight-year presidency in Michigan’s Upper Peninsula.

“Les has turned mirrors into windows, encouraging our community to see beyond self-limits,” says Wyman Fong, a past president of APAHE who’s vice-chancellor of human resources at Chabot-Las Positas Community College District.

On the other hand, Wong, as a teen, was once told by a guidance counselor that a college education would waste his parents’ money. So he grasps how crucial it is for people throughout academia to remain connected to influential figures who believe in and who champion them.

The son of a China-born father and a Mexico-born mother, Wong grew up in Oakland, just 20 miles from the urban university of 29,000-plus students in San Francisco that eventually hired him as its president. Each of Wong’s parents had immigrated during childhood. His father didn’t continue formal studies beyond high school, his mother at third grade.

Sadly, his high school counselor did nothing to fuel any of his college-going dreams. Because he was better known for exploits on the baseball diamond – he played second base and some outfield positions – than for academic achievements, the counselor tried to steer him toward vocational training that would tap into his physical abilities.

The counselor said that he simply wasn’t college material.

Wong ignored the counselor. Upon enrolling at Gonzaga University, he was delighted that professors expected him to use critical thinking skills. 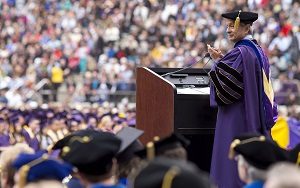 During his SF State presidency, he has sometimes reflected on his high school counselor’s brushoff, especially when he greets first-generation college students and their parents at Commencement and on other occasions. Some of their families encountered similar skepticism and roadblocks – like he did – before their children reached college. Currently, more than 37 percent of first-time freshmen at SF State are first in their families to attend college.

“There is definitely a special connection, because we have so much in common,” Wong says. “This is one of the joys of this job.”

After earning his bachelor’s in psychology in 1972, he taught at a community college. He earned a doctorate in educational psychology from Washington State University and joined the Evergreen State College faculty in the late 1980s.

He began climbing the leadership ladder in 1990 when Evergreen tapped him as an academic dean. Colorado State University-Pueblo recruited him to become its provost in 1996. Later, he served six months as the university’s interim president. By 1999, Valley City State University recruited him for vice president for academic affairs, a role he held until assuming Northern Michigan’s presidency in 2004. Historically, that state’s Upper Peninsula boasts Finnish and Scandinavian populations with deep roots.

When Wong returned in 2012 to the Bay Area, which is much more racially and socioeconomically diverse, he knew that issues disproportionately affecting students of color would command his attention. One of those priorities was addressing SF State graduation rates among vulnerable populations that had stalled.

But some challenges were much stickier to solve.

In 2016, students calling themselves the Third World Liberation Front went on a highly publicized hunger strike. They, along with other protesters, called on Wong to expand rather than implement cuts to the university’s iconic College of Ethnic Studies, widely considered the academic discipline’s national birthplace. Later that year, Wong and the hunger strikers co-signed an agreement that was aimed at reallocating funding for several purposes and creating at least one new academic program, but at Diverse’s press time, it wasn’t immediately clear how much progress Wong’s administration has made toward keeping its end of the deal.

Then came a 2017 lawsuit from Jewish students, alleging that SF State tolerated anti-Semitism such as slurs and epithets, making it risky to wear yarmulke caps and stars of David on campus. The case was settled several weeks ago when SF State agreed to, among other things, hire a coordinator of Jewish student life and to refer all complaints of religious discrimination to independent investigators.

Now that these agreements have been inked, what does Wong think?

“I did my share of losing sleep over everything that unfolded, but to be honest, I am absolutely proud of all of them,” he insists, referring to the activists in both situations.

“The student actions ought to be considered inspiration for the university,” he says. “The students have been agents of change. They don’t get enough credit for their effort to create change for the better. This is the place to learn your roots for it. I wish the news media recognized the value of the activism. The students became true leaders along the way. It’s easy for media to get lost in the noise, like loudspeakers, the hunger strikers stopping traffic. I wish the media had paid more attention to the substance of what was going on.”

Wong and others also wish that more news media would pay attention to the paucity of AAPI senior executives in higher education.

“Les does not like to bring attention on himself, but he has quietly mentored many AAPIs and people of color,” says Dr. Frank Chong, president of Santa Rosa Junior College and an APAHE board member. “I have met many AAPIs whom Les has had a strong influence in their career advancement. He has always advocated on behalf of AAPIs.”

Suffice to say that nagging statistic of only 1 percent of all U.S. college presidents being AAPI keeps driving Wong.

“I tell each of my mentees that he or she is point-5 percent, point-6, point-7,” Wong says. “It is really hard getting us (AAPIs) even to 5 percent. The community needs to come together so that our younger AAPI professionals can see the need, pick up the mantle.”

This article will appear in the May 2, 2019 edition of Diverse.

Stepping Outside the Ivy Walls

College Students Can Change Their Communities By Being Civic-Minded