WASHINGTON – Employers are increasingly demanding employees who are competently trained to meet workplace needs, and a new Gallup study indicates that graduates of online-based Western Governors University are more satisfied than others in a range of school-work-life areas.

The study, unveiled at an event Tuesday at Gallup, compared WGU alumni who received undergraduate degrees between 2013 and 2018 to their counterparts from a Strada-Gallup Alumni Survey national database. Among key findings distinguishing the WGU graduates from nontraditional student graduates and graduates of private not-for-profit and public universities are: 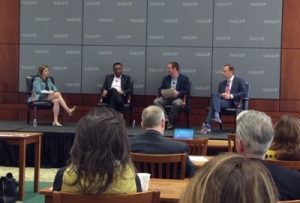 WGU students scored highest among every other group on every metric, and the results are significant.

“Workplace engagement is a measure of an individual’s emotional connection to and investment in their job,” the report stated. “It is an important driver of overall well-being and a leading indicator of organizational performance such as higher profitability. Thus, compared with graduates from the comparison groups, WGU graduates are more likely to be productive employees and emotionally invested in their work.”

“WGU graduates’ strong career well-being comes as no surprise given the high percentage of WGU graduates who are engaged at work in jobs directly related to their field of study,” the report concluded. “Gallup research demonstrates a positive correlation between well-being and engagement at work.”

In remarks after an overview of the report by Stephanie Marken, executive director of education research for Gallup, WGU president Scott Pulsipher said his school is geared toward quickly meeting workplace needs through an outcomes-focused curriculum aligned with market and workforce needs.

Yet, students are allowed to work at their own pace to master competencies, with the average undergrad earning a bachelor’s degree in two and one-half years.

“Everything is actually designed so that every single student feels like the whole university is designed for them, that one individual,” he said.

WGU was established in 1997 by the governors of 19 Western states with the mission of improving the quality of postsecondary education and expanding access, particularly for underserved groups.

It currently enrolls 116,000 full-time students representing all 50 states, the District of Columbia and military installations worldwide, and has awarded more than 140,000 bachelor’s and master’s degrees in more than 60 programs related to business, technology, teacher education and health professions. Relevant certifications are embedded into degree programs.

Four different types of faculty have separate roles: course designers, course instructors, program mentors and evaluation faculty. A new unit begins each month, 42 percent of undergraduates earn a bachelor’s degree within four years and the average student loan debt after graduating is about $15,000, down from approximately $21,000 five years ago, Pulsipher said.

About 6,000 new students enroll each month, he said, the average student age is 36 and more than 60 percent of students are female and first-generation.

Pulsipher announced that on Tuesday, the school launched WGU Academy, an initiative aimed at helping students with no prior college prepare to earn a degree. The access-expanding effort includes focus on power skills essential to social and emotional learning such as teamwork, self-efficacy and communication, he said.

In a panel discussion following Pulsipher’s remarks, Johnny C. Taylor, Jr., president and CEO of the Society for Human Resource Management (SHRM), said the self-reported satisfaction of WGU graduates stood in stark contrast to much of the resentment and frustration that he routinely hears as he interacts with some of the 300,000 SHRM members representing more than 110 million workers around the world.

“I’m shocked to see three in four graduates of any institution, from Harvard on down, to say that it was worth” the cost, said Taylor.
Employers are letting SHRM know that they want workers with the relevant skills and competencies, that they are willing to invest in workers’ education and they don’t care how a school classifies itself, he said.

“Increasingly, employers are going to be your customers. It’s going out the window that you have to appeal to 17-year-olds and their parents.”

Employers increasingly are demanding engaged workers who are curious, creative, flexible and team-oriented leaders, said Taylor added.
“People like that are easier to manage. It really makes for a better overall environment and a happier place to work.”

A shift has begun in higher education away from “a one and done” model to “a lifelong learning loop,” so it’s essential that data be collected to inform how schools adapt and increase access, affordability and successful transition to a workplace fit, Pulsipher said.

To compensate for a severe shortage of adults in the U.S. educational system, he said, there will need to be “a complete reinvention of institutions” that intentionally engages underrepresented groups in postsecondary education.

However, Pulsipher said, colleges and universities generally “don’t appear willing to do that yet.”