African–American women are dying from preventable pregnancy-related complications at three to four times the rate of non-Hispanic White women, according to a report from the Center for American Progress, which also found that the death rate for Black infants is twice that of infants born to non-Hispanic White mothers.

The authors of “Eliminating Racial Disparities in Maternal and Infant Mortality” pointed out that the differences in mortality rates are one aspect of an overall problem in the U.S.

“If the fact that the United States has the highest maternal and infant mortality rates among comparable developed countries is not bad enough, the survival rates for African American mothers and their infants are even more dismal,” the authors wrote in their introduction. 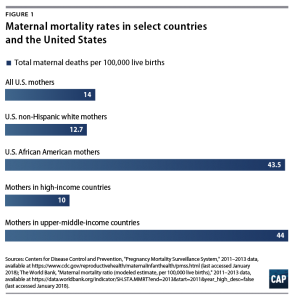 The report states that the racial disparities apply to African-American women “across the income spectrum and from all walks of life.”

A major contributing factor cited at the beginning of the report is racism.

The report recommended various policy strategies for combating the health issues that cause deaths, including:

• offering screening and treatment for women at risk for preterm birth;
• expanding access to midwives and doulas;
• eliminating “maternity care deserts” — areas where access to maternity health care services is limited or absent, “either through lack of services or barriers to a women’s ability to access that care;”
• and improving data collection and oversight.

Cristina Novoa, a senior policy analyst at CAP and one of the co-authors, said that addressing these disparities will require effort. 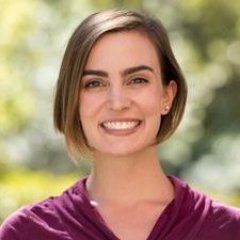 “We can’t expect these disparities to be undone with the stroke of a pen overnight, so I think we really need to appreciate how complex this issue is and how closely intertwined maternal health and infant mortality are,” she said, adding that Congress passed several pieces of legislation in the last session targeting some of the problems.

“We’re encouraged to see so many people are taking up this fight and taking up the mantle,”  she said, referring to the Preventing Maternal Deaths Act, which directs Health and Human Services to take specified steps to eliminate disparities in maternal health outcomes, and the  Improving Access to Maternity Care Act, which requires the Health Resources and Services Administration to identify areas that have a shortage of maternity care health professionals in order to increase those numbers.

One of the report’s recommendations was to train health care providers to address racism and develop a more diverse health care workforce.

Another recommendation included in the report was to strengthen existing programs and support reproductive health care.

“Studies show that when women experience an unintended pregnancy and are forced to carry an unplanned pregnancy to term, they are likely to delay prenatal care,” the report stated. “This can result in poor maternal and infant health outcomes. A woman’s ability to choose if, when, and how to give birth is inextricably linked with her overall health and well-being; her economic security; and her educational attainment.”

The authors noted that behind the statistics are stories of real individuals and families, and that if their policy strategies were implemented, African–American women and their infants would be able “to navigate a more compassionate and family-centered health care system.”

Novoa said that although some progress in public policy has been made, “The next steps are building on the gains we’ve already seen enacted in the last Congress.”