Launched four years ago, APPLE Corps is a two-year program that begins the summer before freshman year when the students take a course in enthnographic research within New York’s diverse communities. Students must be enrolled at John Jay College or one of the other CUNY (City University of New York) Justice Academy partner campuses (six community colleges that offer associate degrees in criminal justice).

APPLE Corps is funded by the New York City Council and is a collaboration between John Jay, the CUNY Justice Academy, the New York Police Department (NYPD) and the NYC Department of Education. It has extensive experiential learning opportunities and professional workshops. 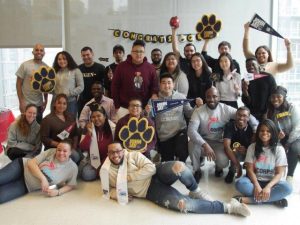 “What I love about APPLE Corps is it opens the minds of students,” said Dr. Crystal Rodriguez, an assistant professor in the social sciences department at Bronx Community College, who teaches the enthnographic research course. “We teach students about policing, but through a different lens. They learn about enthnographic research, where they’re actually administering surveys and conducting interviews.”

During the course, students spend two days per week in the field and two days in the classroom. Rodriguez teaches them how to communicate, relating it to police work. By example, when a police officer is patrolling a neighborhood, he or she has to communicate. Students work in teams, much like police officers.

“How do you get a community to trust you when you’re an outsider coming in?” Rodriguez explained. “The students are on the ground learning. They learn the way you ask questions impacts people’s responses. They learn about research; the importance of collecting data. It’s the same thing at a crime scene.

“That first class really helps them understand what it is to work with a community and how important the community is in solving crimes and in making the community safer.”

In the fall semester of freshman year, the students meet with faculty once a month and work on a research presentation. Research is presented at the annual first-year showcase in December. The students take another course on police and diversity in the summer between their first and second years.

“APPLE Corps is an exceptional program to give students skills that they would need to work in the NYPD or any field in criminal justice,” said Rodriguez, who also oversees the internship program.

Recruitment for APPLE Corps takes place at New York City public high schools. Eligible applicants must be prepared to complete all requirements for the APPLE Corps programs as well as their degree programs. GPAs are not considered in admission because the aim is to create opportunities for all students. There is a dedicated staff of advisors who work with the students throughout the program as well as peer mentors.

Those selected for the program receive a $20,000 stipend across the two years they participate with the goal of keeping them in college and graduating within four years. Throughout the time in the program, APPLE Corps students have opportunities to engage with the NYPD and learn about careers. Following the two years of the program, students may join the NYPD Cadets and get on track to enter the Police Academy following graduation.

“We have different experiences which really expose them to the communities that they’re going to one day serve based off of their interest in either joining the NYPD or collaborating with the NYPD in different capacities,” said Dr. Jennifer Hernandez-Khan, program coordinator for APPLE Corps. “Students participate in different workshops and activities in relation to justice and not only learn about it in the classroom, but also have experiential opportunities where they’re able to connect theory to practice.

This year marks the first graduating class and 60.8 percent graduated from the first cohort admitted in 2015, which is significantly above the four-year graduation rate at John Jay.

“Our students are going to be better prepared to understand the needs of communities and to really listen and be a voice for community members,” said Hernandez-Khan.

Graduating senior Allan Lin, a criminal justice major, has participated in NYPD Cadets since completing the APPLE Corps program and is hopeful to enter the Police Academy in July. He found the sense of purpose and supportive environment of APPLE Corps sustained him throughout college.

“I’ve always wanted to be a police officer. I took criminal justice to help me better understand the criminal justice system,” said Lin, who in addition to English speaks two Chinese dialects. He interned at Meals on Wheels and Apostle Soup Kitchen and now works at One Police Plaza.

Graduating senior Andrea Akinbola recently completed an internship with the Innocence Project, a nonprofit legal organization that works to overturn wrongful convictions. In August, she will begin her studies at the Maurice A. Deane School of Law at Hofstra University. She said taking part in APPLE Corps helped her find her career path.

“Beyond the financial support, it was having people around to help me throughout the journey,” said Akinbola. She appreciated the way the APPLE Corps cultivated the interests of people desirous of working in often overlooked communities.

“My internship at the Innocence Project was life changing,” she said. “I knew I had a passion to help young people before they had contact with the criminal justice system, but now I realize that there are young people who have been wrongfully convicted. There’s a need for a community to assist them in being exonerated.”