Nunez Community College in Louisiana and St. Edward’s University in Texas have been added to the American Association of University Professors list of administrations censured for failing to observe generally recognized principles of academic freedom and tenure.

Delegates to the AAUP’s 105th annual meeting voted Saturday to approve the censures. They also: 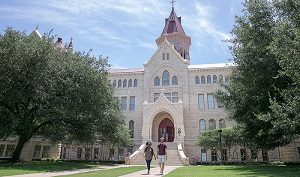 · Added Vermont Law School to the association’s list of institutions sanctioned for serious departures from AAUP-supported standards of academic governance because of a faculty restructuring that basically excluded faculty involvement.

· Removed Idaho State University from that list. AAUP sanctioned the school’s administration in 2011 after the Idaho State Board of Education suspended the faculty senate on the recommendation of the university’s president after several years of intense conflict between the senate and the administration. In spring 2018 the president whose actions led to the sanction, retired, and his successor approved a proposed new faculty senate constitution that the faculty had ratified.

· Were notified that the Committee on College and University Governance is monitoring but not recommending sanctions against Maricopa Community College in Arizona, where “sound principles of academic governance are in the process of being restored.”

At Nunez Community College, the administration terminated the services of an associate professor of English with 22 years of service, and the AAUP investigating committee determined that the professor was not given the dismissal hearing to which he was entitled as the result of having obtained de facto tenure through length of service.

Investigators also concluded that the administration violated the professor’s academic freedom to speak on institutional matters without fear of reprisal.

At St. Edward’s, the investigators report concerned the dismissals of two tenured faculty members and the nonrenewal of a tenure-track faculty member.

The two tenured professors were not afforded academic due process, and the committee also found credible their claims that their criticism of administrative decisions led to the actions against them.

The committee found that the tenure-track faculty member was not afforded adequate notice of nonrenewal or the opportunity to appeal the decision to a faculty body, and that the nonrenewal was a consequence of her having lodged complaints of sexual harassment against an administrator.

General conditions for academic freedom and governance at St. Edward’s were found to be “abysmal,” with “fear and demoralization” widespread among the faculty.