WASHINGTON – At a time when speaker disinvitations are making headlines, colleges and universities would serve the interests of intellectual discourse and robust discussion by helping students understand the value of engaging political and other perspectives different from their own on campus, panelists said Tuesday at a Bipartisan Policy Center forum dedicated to the topic. 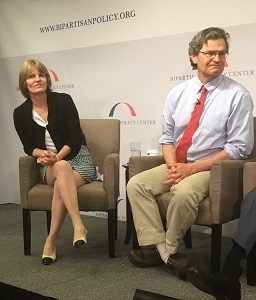 In the panel discussion titled “Protesting the Podium: Campus Disinvitations” –presented by the center’s Campus Free Expression Project and moderated by project director Dr. Jacqueline Pfeffer Merrill – four academics agreed that attacks on a speaker’s character rather than his or her views works against civic discourse, finding common ground on challenging issues and advancing a dynamic democracy.

“Argument is the fundamental basis of free speech” and in academic settings should focus on challenging views rather than the character of the one expressing them, said Dr. Harvey C. Mansfield, who teaches political philosophy and is the William R. Kenan Jr. Professor of Government at Harvard University.

A combination of technological advances, a contentious political climate and perhaps child-rearing contribute to uncivil discourse and unwillingness to tolerate free speech rights of others, particularly as it relates to guest speakers on campuses, said Dr. Matthew J. Dickinson, a political science professor at Middlebury College and a former governmental studies fellow at the Brookings Institution.

“The worry I have is it has gone beyond simply disinviting a commencement speaker. It’s seeping into how we teach classes,” said Dickinson.

He wonders if at some point he will be “hauled in” and his academic freedom threatened because a student complains that information taught is personally unsettling or harmful.

“Tenure may no longer even be a protection,” he said.

There should be a distinction drawn between inviting speakers who are provocateurs with nothing intellectually serious to offer and those who bring an intellectually honest perspective that contributes to intellectual diversity and challenges popular opinion, panelists said.

“We’re clearly working through, in some cases with great difficulty, who gets to speak to whom and on what subjects on many college campuses,” said Dr. Michael S. Roth, president of Wesleyan University and former associate director of the Getty Research Institute.

Dickinson recalled inaccurate media reports and false accusations that he secretly hosted a disinvited speaker when Middlebury cancelled a planned appearance by a member of the Polish parliament who was sharply critical of gay rights.

Dickinson said he learned shortly before the scheduled presentation that the university had pulled back the invitation extended by the student chapter of the American Enterprise Institute. When a student in a seminar class that Dickinson was teaching suggested inviting the speaker to talk to the class, Dickinson said he would do so if there were no objections in an anonymous vote.

All nine students voted to invite the speaker, several dozen other students showed up to hear him and “it was one of the best teaching experiences I have ever had,” said Dickinson.

The incident had “something of a chilling effect,” Dickinson added, but “it reignited the debate on campus about who should control speakers coming to campus and what should the criteria be on which they are invited.”

Mansfield recalled an occasion where university in Canada rescinded an invitation for him to give a commencement address after he had accepted.

He received a disingenuous “sorry for the inconvenience” letter stating that he had never been invited, he said, and he later wrote about free speech and feminism – “which I felt was a bad actor in the whole mess” – in an op-ed for a national news publication.

When Kerrey was president of The New School, the institution invited U.S. Sen. John McCain to be the main commencement speaker in 2006. Although McCain had received a standing ovation when he spoke at the school years earlier, this time he was heckled and jeered, with some students turning their backs to him as he spoke.

More concerning to Kerrey than the protests, he said, was that critics labeled the school anti-Black and anti-gay for inviting the conservative Republican lawmaker, who the following year officially announced his candidacy for the U.S. presidency.

“Governance matters,” Kerrey said, adding that sometimes administrators or trustees panic and make bad decisions regarding free speech on campus – such as disinviting speakers – when external people weaponize social media against a speaker or institution with whom they disagree.

“Education means you learn something you didn’t knows before,” said Kerrey, “and sometimes that’s uncomfortable.”

Feelings of comfort and safety among students, particularly historically marginalized groups, may stifle free speech in the name of diversity and inclusion when there’s an objection to a speaker invited to campus or even course material taught, some panelists suggested.

“You aren’t entitled to a feeling that prevents you from understanding things you don’t want to understand,” said Mansfield.

Mansfield contended that while there is more diversity on campuses in terms of race, class and gender, there is less intellectual diversity. He attributed that to academics with liberal leanings, who he said now have less devotion to the ideals of free speech than when they were the first champions of the constitutional right.

“In some ways, the two parties have switched sides,” said Mansfield. “Liberals have gone to the side of suppression and marginalization and now they are the chief practitioners of marginalization. American schools seem to have lost the notion that you should show a bipartisan face to the world.”

Kerrey said he strongly objects to the idea of microaggressions, saying it has become a “force” in higher education used to unfairly punish people who inadvertently hurt someone’s feelings by, for example, mistakenly referring to a student with a gender pronoun other than what the student prefers.

Dickinson said he warns students when a course begins that the classroom is a safe and welcoming space for them to express their views and be heard and valued, but he will challenge them intellectually and provoke debate for their own good.

Wesleyan has “an affirmative action program for conservatives” to foster intellectual diversity on campus, Roth said somewhat tongue-in-cheek, citing a left bias in humanities and social sciences. Its goal is to bring to campus different perspectives from those faculty may have, he said, and to help students be open to the reality that predominant views on campus may be wrong.

“You’re safe” is the message to students, Roth said, “but you’re not safe from new ideas.”