As Dr. Judy Genshaft’s 19-year tenure as president of the University of South Florida (USF) System comes to an end, the system has seen graduation rate gaps by race, ethnicity and socioeconomic status close; significant economic impact in the Tampa Bay region; and, among other successes, a new designation as a “Preeminent State Research University” – only the third institution in Florida to receive the honor.

Such accomplishments exemplify the “spirit and determination” of USF, Genshaft says, adding that they speak to a system-wide effort among administrators, faculty, staff and other stakeholders to fully invest in a mission to achieve “very clear outcome-based metrics.”

Driving Genshaft’s leadership over the years is her affinity for bringing teams together around impactful goals, she says. It is the Ohio native’s background in psychology, and specific focus on the psychology of gifted students, that has given her an appreciation for the “transformative” role that higher education plays in cultivating creativity and shaping lives for all student populations.

“The USF presidency was a perfect fit because it combined my professional experience in educational psychology with my foundation in research and my passion for helping others,” Genshaft says of becoming the system’s sixth president in 2000. Prior to USF, she served as vice president of academic affairs at the University of Albany in New York. 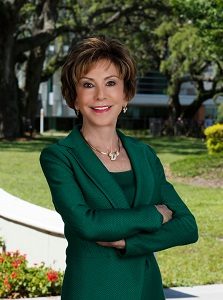 Genshaft sums up her guiding philosophy to serving students in three words: support, comprehensive and unstoppable. She chooses these words because, at USF, leaders believe in creating a “culture of care” where everyone makes student success a priority, student supports go beyond academic interventions and students are empowered to achieve anything with hard work and talent, she says.

“Every student at USF has so much potential,” she says of USF’s more than 50,000 students. “We believe every one of them will succeed if given the opportunity.”

“We like to say, we are more interested in ‘supporting’ than ‘sorting’ our students,” Genshaft continues. “It’s our responsibility to make sure students have all the resources and opportunities that will help them be successful – including a vibrant campus life, study abroad experiences, career development and so much more.”

USF’s intentional commitments under her leadership have resulted in an increase in enrollment across all the system’s campuses in the last few years and more students living on campus system-wide. The four-year graduation rate for first-year students has increased from 43 percent in 2009 to 60.5 percent this year.

The system’s prominence as a research powerhouse has also led to more than $568 million in annual research expenditures, up from $145 million when Genshaft started as president. USF boasts 96 U.S. patents, placing the university system in the top 10 public universities with the highest patents awarded.

“It’s important to note that public research universities are increasingly taking on roles as powerful economic drivers, and I’m proud of the role USF has played in this regard for the Tampa Bay region and beyond,” Genshaft says. “As a research university, we have a differentiated mission to promote innovation and invention.

The discoveries, technologies, best-practices and new knowledge being developed by our talented faculty and students each day make tangible impacts on the world around us.”

Genshaft notes that, because there are “so many things” that she’s proud of accomplishing in her time at USF, it is almost impossible to choose just one. This year alone, leaders celebrated a number of historic USF achievements, including the completion of a $1 billion fundraising campaign, making the university one of only three universities in the country to do so.

On the diversity and equity front, USF has been recognized nationally by several organizations for driving the success of its Black, Hispanic and Pell Grant-eligible students. It received the American Council on Education’s award for institutional transformation for providing all students with a high-quality experience that has tripled graduation rates since Genshaft arrived at the institution.

Genshaft hopes that all students leave USF with not only knowledge and skills, but also the drive, determination, open-mindedness and inclusivity to “take them as far as they can go in whatever path they choose.”

Dr. Steven C. Currall, the former provost and a vice president at Southern Methodist University, will replace Genshaft as the university’s next leader. In March, he said he looked forward to building “on the momentum created during President Genshaft’s transformational tenure.”

Genshaft’s advice for her successor is to keep a consistent focus on the right goals: student success, research productivity and making a global impact.

Those goals “got us where we are today, and that same focus will continue to propel us to even greater heights,” she says.

In June, Genshaft announced that she would give an additional $3 million to the university along with her initial $20 million pledge for a new building that will house the Judy Genshaft Honors College at USF’s Tampa campus. In addition, USF community members will soon see USF Maple Drive turn into USF Genshaft Drive.

But beyond physical indicators, Genshaft’s legacy will be felt in her efforts to transform the lives of students, enhance the community and create a better society.

“Everything we’ve accomplished at USF has been with that goal in mind. To make life better,” she says. “That is a legacy that any of us would be proud to leave.”

This is one in a series of articles about retiring college presidents.