An interim leader took the reins at Bennett College on Friday after the sudden departure of the president of the small, historically Black women’s school.

Bennett has fought to stabilize its footing amidst financial and accreditation challenges, issues that have become widely public since last year. Dr. Phyllis Worthy Dawkins had been shepherding the college through the quagmire, initiating a financial campaign dubbed #StandWithBennett that galvanized public support and raised about $9.5 million. But the school’s board of trustees announced Friday that Dawkins was no longer president as of that day and that Dr. Gwendolyn O’Neal was appointed interim president immediately.

In a news release issued Friday by the college, trustees chair Dr. Gladys Robinson thanked Dawkins for her leadership and dedication “during challenging times.”

“We look forward to securing new leadership that will take the college to the next level,” said Robinson.

The college has not said whether Dawkins quit, was fired or was asked to resign.

On Monday, Dawkins and O’Neal could not be reached for comment. The public relations firm, APCO Worldwide, which represents Bennett did not return a call seeking comment.

Dawkins was named interim president of Bennett in August 2016 and became permanent president in July 2017. She earlier had served as the college’s provost and vice president for academic affairs.

At all three schools, Dawkins was the accreditation liaison officer and played a critical role in reaffirmation of their accreditation by the Southern Association of Colleges and Universities, Commission on Colleges (SACSCOC) or, in Cheyney’s case, the Middle States Association of Colleges and Universities. She also gave presentations at SACSCOC annual conferences on topics ranging from institutional effectiveness to faculty development.

At Bennett, Dawkins would have to draw on that expertise after SACSCOC placed the college on probation in December 2016, less than six months into her tenure as interim president. The action was a step closer to revocation after the agency had issued warnings to the school in prior years.

When the two-year probationary period given by SACSCOC ended last December, the agency withdrew accreditation. Although enrollment and retention were improving and academic strength was not an issue, concerns persisted about Bennett’s financial and long-term stability. 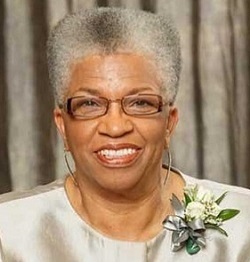 But that wasn’t enough. Bennett lost the appeal, during which time it had kept accreditation. The college immediately sued SACSCOC, reaching an agreement to keep accreditation until the suit was resolved – effectively, another 12 to 18 months.

Meanwhile, Methodist-founded Bennett had begun seeking accreditation through the Transnational Association of Christian Colleges and Schools (TRACS). That process is still in progress.

O’Neal, a Bennett alumna, served as a professor and head of the Department of Consumer, Apparel and Retail Studies at the University of North Carolina at Greensboro. She also led the International Textiles and Apparel Association Commission on Accreditation and had been an associate professor at Bennett after receiving her master’s degree in education from UNC Greensboro.

Like Dawkins, O’Neal holds a Ph.D. from Ohio State University.

O’Neal will lead a transition team as trustees work to get the college’s 19th permanent president in place before the start of the academic year this fall. Earlier this year, the college predicted an enrollment this fall due to receipt of more than 3,000 applications.

According to the College Scorecard, Bennett has just over 400 students with a 45-percent graduation rate within eight years. The average annual cost is about $23,000 and about 78 percent of students receive federal loans. After graduating, the average loan debt is $38,243 and the average annual salary is $30,600.