Sickle cell disease may not be a hot topic of discussion in health and medical circles, but it still affects many African-Americans – and Dr. Dora Clayton-Jones intends to raise awareness and put a spotlight on patient care and advocacy as the new president of the International Association of Sickle Cell Nurses and Professional Associates.

“Some people think it’s cured,” said Clayton-Jones, an assistant professor and Arthur J. Schmitt Leadership Fellow at the Marquette University College of Nursing. “They are advancing science, but remedies like bone marrow transplants aren’t widely available. Gene therapy is still in development. So, we still have work to do in finding a cure and on the psychosocial level.”

Sickle cell disease affects about 100,000 Americans, overwhelmingly Black people, according to the Centers for Disease Control. The condition plagues one in every 365 Black babies born – with about one in 13 of those infants carrying the sickle cell trait – compared to one in every 16,300 Hispanic-American births.

It has affected the lives of numerous well-known individuals, from Paul Williams of The Temptations and Miles Davis to actor Larenz Tate, sportscaster Tiki Barber and entertainers Prodigy and Tionne “T-Boz” Watkins. 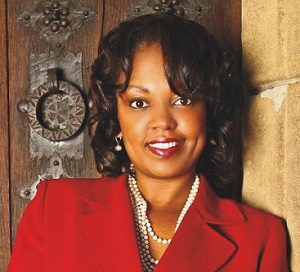 During Clayton-Jones’ term as president of IASCNPA, which began May 1 and concludes at the end of 2021, she plans to grow the membership and continue collaborating with organizations such as the Foundation for Sickle Cell Disease Research and the Sickle Cell Disease Association of America on programs that raise awareness and promote care support at local, national and international levels.

Chicago-born Clayton-Jones has a passion for advocating and caring for people with sickle cell that began with a childhood desire to help others. As a “candy striper” hospital volunteer in high school, she knew she wanted to work with children and youth in a helping profession.

She enrolled at the University of Wisconsin, Madison and began studying pre-physical therapy, but she eventually realized that wasn’t the type of work she most wanted to do. As she considered her life and role models, the difficulties of not growing up with her father, her mother’s mental and physical challenges, personal health challenges and two caring and inspiring aunts who worked as nurses, she came to a realization that nursing would be a better career fit.

“Reflecting on my own experiences and the impact that adults have had in my life,” Clayton-Jones said, “and specifically what they’ve done to have such a major impact on my life, I always wanted to be able to provide that to youth, as well.”

She completed her bachelor’s degree in nursing at UW-Madison and went on to earn a master’s and Ph.D. degrees, both in nursing, from Marquette. Along the way, she became a board-certified nurse practitioner with expertise in school-based health and pediatric acute and chronic illnesses.

“But I became really interested in sickle cell when I knew I wanted to do research,” said Clayton-Jones.

She has conducted several grant-funded research projects and her scholarship has appeared in numerous publications, including the Journal of Religion and Health, Journal of Transcultural Nursing and Western Journal of Nursing Research.

In choosing an area of study, an abundance of available research dollars and a chance to “get famous” were not important to Clayton-Jones, she said. She was concerned about groups she could most help.

Having cared for sickle cell patients and a younger brother with the trait, she said she felt strongly that “this is a population where I could make a difference.”

When Clayton-Jones was attending a Sickle Cell Disease Association of America conference in 2015, a colleague told her about the IASCNPA. She joined, and now she’s leading the 29-year-old advocacy organization.

From local events to workshops at national conferences, she plans to lead members in efforts to raise awareness of a condition that affects millions of people globally, from the Americas and Africa to the Mediterranean, Turkey and India.

Many people don’t know about the disease or don’t know their sickle cell status, Clayton-Jones noted, so they don’t receive the care that can help manage it.

“Dr. Clayton-Jones’ dedication to the IASCNAPA reflects our Jesuit mission of cura personalis, care for the whole person,” Krejci added. “She has a long history of advocating for those in the community who have been disadvantaged, especially the youth. Her outstanding leadership will bring more awareness for sickle cell disease and the important work nurses do.”