In the wake of allegations of sexual harassment and assault against a Morehouse College administrator that lit up social media late last week, an attorney representing one of the young men said there appear to be numerous victims and perpetrators and accused the all-male school of ignoring complaints for years.

In a news conference Monday afternoon, attorney Tiffany M. Simmons said that in addition to her client, student Michael Key, two other Morehouse students and their families had contacted her within the last 48 hours with allegations of sexual harassment and assault by administrators and staff at the Black college in Atlanta. 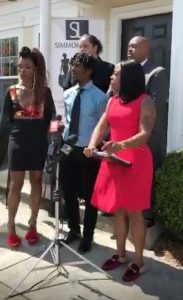 “This is a disgrace that Morehouse has allowed this to happen not only to my client, but to other clients in similar situations,” said Simmons, who was joined by co-counsel Corey Martin outside his office in Douglasville, Ga.

“We want change, because this has happened too many times to my client, and other students,” Simmons said.

In a statement issued Monday evening, senior media and public relations manager Aileen Dodd largely reiterated an official statement last week: that the school is committed to providing a safe, harassment-free environment and that allegations of sexual misconduct will be swiftly addressed.

It added: “In the recent matter involving a student who made allegations against an employee on Twitter, the College is using a neutral third party for the investigation. The allegation is still under investigation.”

Simmons said civil and criminal charges are being prepared against Morehouse and assistant director of student affairs DeMarcus Crews, whom the college placed on unpaid administrative leave last week after Key and at least two other Morehouse students released Twitter videos accusing Crews.

She called on the school to conduct an internal investigation and to implement policy changes.

“The thing we want from Morehouse college is, we want change,” she said, also accusing the college of negligent hiring and retention and violation of Title IX.

A rising junior from Chicago, Key, 20, said the alleged experiences tarnished his initially sterling image of Morehouse and that he plans to transfer to another school. He’s a rising junior with a major in sociology and a minor in Spanish.

Key said unwanted sexual advances from Crews began his freshman year and continued until January 2018. He said he had complained to a residence hall director and filed a Title IX complaint, but the college stopped communicating with him and did not follow through.

He said that one morning he woke up and began to cry. He went for a walk in the rain and texted his mother that he no longer wanted to be here, meaning alive. He told his parents what had been occurring, and they said they would support whatever decision he made.

Discouraged by silence and inaction on the college’s part, he took to Twitter.

Key said he has received “a lot of support” from students at Morehouse, Spelman College and Clark Atlanta University, a sister HBCU in Atlanta. And he was surprised to learn that many other male and female students said they had similar experiences.

He said Morehouse officials contacted him after his Twitter posts went viral.

Now, Simmons said, they can talk to her and Martin.

“Morehouse, at this time, is choosing image over students,” Simmons said, “and that is not acceptable. They should be held accountable.”

The Wind is at My Back