A couple of weeks ago, the Wi-Fi in Shawn Nez’s Arizona home kept flickering on and off.

“It was always happening between the afternoon and the evening,” Nez said. “We would have a bunch of internet problems or we wouldn’t have connection or we would have really slow speed. That was for about a week or two.” 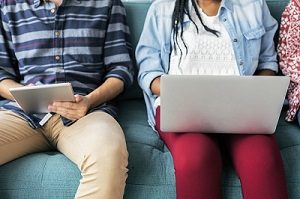 Nez is in Pima County, home to the capitol of the Tohono O’odham Nation. He graduated from the local tribal college, Tohono O’odham Community College, in 2016, before transferring to Navajo Technical University to study Information Technology.

Thankfully, it’s summer. Nez said, otherwise the internet troubles can be an issue for students, “especially if we have an assignment coming that’s due the next day and we gotta work on it. No doubt, it’s definitely a factor for students out here.”

The halting Wi-Fi Nez described isn’t uncommon in tribal lands – and it’s a long-standing problem for tribal colleges and universities.

“Tribal colleges are significantly behind in terms of internet connectivity,” said Carrie Billy, president and CEO of the American Indian Higher Education Consortium.

Her organization is trying to figure out the extent of the problem. In 2017, it won a grant from the National Science Foundation to conduct a three-year cyberinfrastructure study, exploring tribal colleges’ access to internet and technology. Since then, the team has visited 29 tribal colleges and universities. The results have been eye-opening.

“It’s not a big return on investment,” said Al Kuslikis, senior associate manager for strategic initiatives at the American Indian Higher Education Consortium. These providers might not even “break even,” let alone make a profit, he said.

But it’s not just about speed. Internet service is also often expensive for these institutions. On average, tribal colleges and universities are paying between $40,000 and $250,000 per year for their internet connection. According to the study, Iḷisaġvik College in Alaska actually has the priciest and lowest-quality internet of any higher learning institution in the United States because of its remote location – and the high price tag that results.

“They’re paying the most for the least,” Billy said.

The internet connectivity issue fits into a wider landscape of technology troubles for tribal colleges, Kuslikis added. For example, the standard timeline for IT equipment replacement is three to five years. At tribal colleges and universities, the average was over eight years.

That lag puts a strain on STEM programs and creates added stress for campus IT teams.

“IT is doing the best they can with the resources they have,” he said.

Limited Wi-Fi and technology can come with repercussions for faculty. Billy would like tribal colleges and universities to be a “community of practice,” where professors across the U.S. connect to exchange research, teaching advice and ideas. But technical problems make that hard to sustain, she said.

Students also suffer. Even when campuses do have quality Wi-Fi, most students commute in from surrounding areas with spotty service. They may not have reliable internet to complete their assignments at home or to keep in touch with their professors outside of class.

Billy described some students working on their homework in their cars after the libraries close, because the Wi-Fi in campus parking lots might be better than what they have at home. If students need to work late, sometimes they just sleep in their cars.

“It’s creating a weekday homelessness situation,” Billy said. “These students can’t afford to go back and forth.”

It can also be an issue for the wider community. Many tribal colleges and universities – 31 of them – serve as the primary public libraries for their areas. People out of college rely on campus Wi-Fi and technology, as well.

There are, however, possible solutions. Some tribal colleges have partnered with state schools to improve their service, Kuslikis said.

As research for the cyberinfrastructure study continues, Billy and her colleagues hope it will show them what work needs to be done and how much it will cost tribal colleges to improve their Wi-Fi connections.

“It’s been so revealing to us,” she said. The study, she added, shows “there are things we can address.”

Perspective: Beyond Borders—STEM Education as a Global Priority