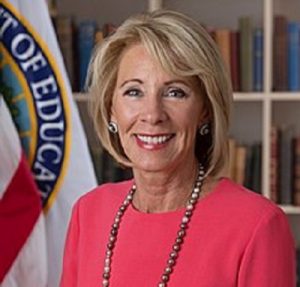 “The GAO report released today further proves what I’ve long said: there is significant risk in the federal student loan portfolio,” she said in a statement. “For years, there have been deliberate efforts to make the maze of student aid more complex for students and less accountable to the American taxpayers who underwrite it.”

The report “is just the latest proof that many of the policy ideas previously pursued were poorly implemented,” she continued. “Misrepresenting income or family size is wrong, and we must have a system in place to ensure that dishonest people do not get away with it. We didn’t create that problem, but rest assured we will fix it.

DeVos said the GAO highlighted “the lack of accountability built into these programs creates significant risk for taxpayers. That’s why the department has already looked at ways to better verify income and family size for all borrowers enrolled in income-driven repayment programs. However, without Congressional action, we are unable to partner with the Internal Revenue Service to independently verify this information.”

She again called on Congress to give her department the authority to independently verify income using IRS data. That would allow the ed department to “significantly reduce the risk of fraud and improper payments, save taxpayers money and reduce the burden on borrowers when they annually recertify their income with the department.”

DeVos added that, in the meantime, her department is working to identify and refer cases of suspected fraud to the Department of Justice for prosecution.