Vandalism Spurs Investigation at the Department of Education - Higher Education

Vandalism Spurs Investigation at the Department of Education

An investigation is underway at the Department of Education after an employee’s office was vandalized last week. 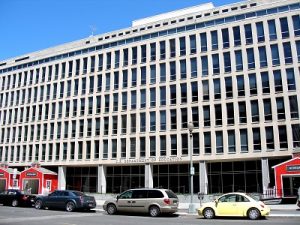 U.S. Secretary of Education Betsy DeVos called on Federal Protective Services “for a comprehensive investigation” of “an incident involving an employee’s personal belongings on the third floor,” according to a statement from Department of Education spokesperson Angela Morabito.

No one was injured and no suspect has been named, Federal Protective Services spokesperson Rob Sperling told Fox News, but an employee’s “figurines and pictures” were damaged.

Citing unnamed sources, NBC News reported that the employee was an African-American woman hired as a “diversity change agent” to provide diversity training for staffers, and that her vandalized belongings included African art figurines with their heads and limbs detached and a poster of desegregation icon Ruby Bridges ripped from the wall.

The alleged incident happened around noon last Tuesday while the employee was away from her workspace, according to Fox News.

The Department of Education had not confirmed those reports or responded to an inquiry from Diverse by Monday evening.

Last Friday, Morabito told NBC News: “Because this is an ongoing law-enforcement matter, it is inappropriate for us to comment any further on specifics.”

Frank Brogan, assistant secretary for elementary and secondary education, reportedly sent an internal email to staff at the Office of Elementary and Secondary Education, notifying them of an unspecified “unfortunate incident” on their floor under investigation and condemning “this cowardly action” as “intolerable and unacceptable.”

Unnamed sources from the Department of Education expressed concern that the attack was racially targeted, according to NBC News.

“I don’t know if it was targeted, but it sure does feel like it,” an employee told NBC. “To pick one room and to go in and destroy it like that.”

Dr. John B. King, who served as secretary of education under President Obama, shared the NBC article on Twitter, commenting that he felt “profoundly saddened.”

King wrote that he’s thinking of his former Department of Education colleagues, as well as the department’s “mission to protect students’ civil rights & advance equity” and the “nation’s need for justice & love.”

Morabito told NBC News that the incident troubled secretary DeVos, who she said “took immediate action, including referring the case to Federal Protective Services for a comprehensive investigation, increasing building security, and most importantly, ensuring the impacted employee was supported.”