Florida A&M University is celebrating the unveiling of a statue of tennis player and alumna Althea Gibson in New York, overlooking Arthur Ashe Stadium. The ceremony took place at the National Tennis Center in Flushing Meadow. 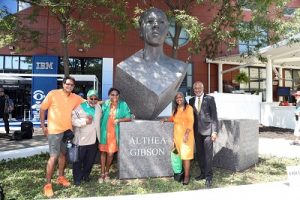 “It’s a very inspirational moment for me to hear these tennis giants talk about the ultimate tennis giant being a FAMU graduate, talking about Althea Gibson, talking about how she inspired them, motivated them, trained them and played with them throughout her career, and how that culminated in her being honored with a statue in front of Arthur Ashe Stadium, is amazing,” Robinson said.

He noted that Gibson “opened the door” for famous players like Arthur Ashe and Venus and Serena Williams, who spoke at the unveiling.

In August, the FAMU board of trustees named the university’s tennis complex after Gibson, in addition to the memorial plaque that was there to commemorate her.

“It’s phenomenal to think about what this ‘Rattler’ did for the history of tennis and for the present-day tennis in this nation and around the world,” Robinson said, invoking FAMU’s team name.