WASHINGTON – At the opening ceremony of the 2019 HBCU Conference, Johnathan M. Holifield, executive director of the White House Initiative on Historically Black Colleges and Universities quoted Booker T. Washington, telling those in the audience to “Cast down your bucket where you are.” 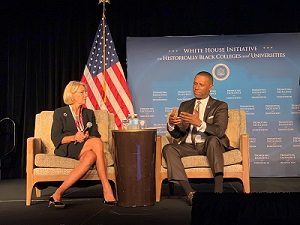 U.S. Secretary of Education Betsy DeVos participates in a conversation with Johnny C. Taylor, the president and CEO of the Society for Human Resource Management.

He meant that HBCUs need to not only build federal partnerships but draw on local resources and advised the crowd to encourage their cities, counties and states to develop HBCU support plans and designate HBCUs as small businesses, among other regional efforts.

“Yes, we have to win Washington D.C.,” Holifield said. “We know that. But we also have to take the fight where we are and replicate what’s happening here where we live.”

The importance of strategic alliances at the federal and local level – and the interplay of the two – was a theme that ran throughout the first day of the conference.

The event kicked off with a federal policy conversation between U.S. Secretary of Education Betsy DeVos and Johnny C. Taylor, president and CEO of the Society for Human Resource Management and the former president of the Thurgood Marshall College Fund.

DeVos began by emphasizing the importance of valuing paths to the workforce outside of four-year degrees. Many positions don’t require a bachelor’s degree, she said, and it’s “imperative that the employer world get together really intentionally with the education world” as early as middle school so students know there are other options like certifications or apprenticeships.

“HBCUs have a very important role to play in this regard,” she said. “… What can you do as institutions that will separate yourselves from others? What can you do to really focus in on and honing those particular niches and offering opportunities in a unique way to students that you’re serving?”

She also expanded on two Department of Education initiatives: the Federal Work-Study Program, a pilot which allows students to do federal work study off campus to gain professional skills, and Education Freedom Scholarships, a proposal that would establish a federal tax credit to which people or corporations could contribute, with states opting into the fund to expand private school choice. She suggested that the latter would better prepare students for postsecondary education.

“We know today that there are too many kids that are forced to be in schools that just aren’t the right fit for them,” she said. “They’re not achieving, they’re not learning, for whatever reason.”

On Tuesday, President Donald J. Trump is expected to deliver remarks before the crowd that includes HBCU leaders and students.

Some of the breakout sessions, like “Second Chance Pell – Creating Opportunities that Change Lives,” explored how individual HBCUs can participate in federal programs. 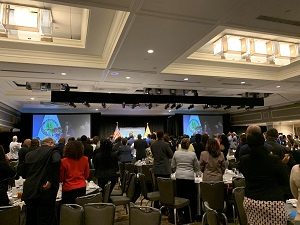 Shorter College President Rev. Dr. O. Jerome Green spoke about how his institution partnered with Arkansas Community Correction and the Arkansas Department of Corrections to bring higher education to prisons as a part of the Second Chance Pell pilot program, which extends financial aid to incarcerated students.

“This initiative has received so much support from both sides of the aisle,” Green said.

Green was joined by Kevin Murphy, director of Arkansas Community Correction. He agreed that even as “someone coming from a very conservative side,” Second Chance Pell was a “no brainer.”

“These men and women behind bars are hungry,” he said. “They know they need this to thrive and flourish.”

Stormy Cubb, director of special projects and sponsored programs at Shorter College, described the entrepreneurial associate’s program the school offers its incarcerated students. So far, Shorter College has served 593 students at the Arkansas Department of Corrections and 1,135 students at Arkansas Community Correction.

Panelists advocated for HBCUs to join the 64 colleges offering programs in prison as a result of the pilot. Three HBCUs were selected in 2016: Shorter College, Wiley College, and Langston College. Applications for colleges and univiersities to participate have recently been reopened by DeVos.

Other breakout sessions focused more on the individual needs of campuses and the partnerships that could help them meet those needs. One session focused on campus safety, with panelists from individual HBCUs as well as the Department of Homeland Security and the Department of Justice.

Department of Homeland Security Director Scott F. Breor, who works in the Protective Security Coordination division, stressed tools like “hometown security,” a website by his department with resources for school safety and security. Meanwhile, Terrance Calloway, vice president for safety at Florida A&M University, suggested best practices for individual campuses, emphasizing a clear mode of communication with the campus community.

Darlene Johnson, associate director of the Department of Justice Office on Violence Against Women, emphasized that violence against women needs to be a part of the equation when administrators talk about campus safety.

“Violence against women is lower on the totem pole,” she said. “It’s not as important. It’s not as critical. But I think it’s really critical.”

Dr. Goulda A. Downer, a professor at Howard University stressed the need for HBCUs to offer training and degrees in emergency management, a “new field.”

Another session highlighted how HBCUs can invest in cyberinfrastructure and campus-wide broadband networks to become more competitive. Panelists explained how they funded IT initiatives on their own campuses through grants and funding from government agencies.

Gregory W. Clinton Sr., director of information technology and facilities at North Carolina University School of Law, described his work with the Virtual Justice Program, which he co-directs. The program melds legal education and technology, offering virtual pre-law classes easily accessible to underrepresented students and the Know Your Right videoconference series to help people advocate for themselves.

Dr. Deborah F. Dent, chief information officer at Jackson State University, advocated that HBCUs strive for not just “smart campuses” but “intelligent campuses,” schools that lay out clear plans for updating their technology instead of adding new technology in an “ad hoc” way. She said HBCUs should collaborate to move forward and negotiate for funding opportunities in order to bridge “the digital divide” between their institutions and schools with more resources.

“We have to break the silos,” she said, followed by a resounding “amen” from the audience. “We have to realize we’re only competing on the football field. There’s power in unity.”