Earlier this month, the Virginia Theological Seminary (VTS) created a $1.7 million fund for reparations, “putting one of the oldest Episcopalian schools at the forefront of a movement among universities and other groups seeking to reconcile slavery’s enduring legacy in their organizations” reported The Washington Post. 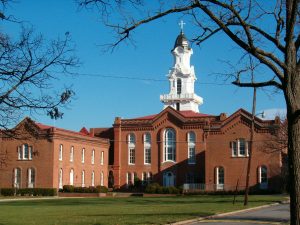 “This is a start. As we seek to mark Seminary’s milestone of 200 years, we do so conscious that our past is a mixture of sin as well as grace. This is the Seminary recognizing that along with repentance for past sins, there is also a need for action,” said Rev. Ian S. Markham, dean and president of VTS.
The income from the endowment will be used to support the work of African American alumni/ae, especially in historic Black congregations; train African-American clergy in The Episcopal Church; and sponsor programs that promote justice and inclusion.
“This initiative has the potential to be transformative,” said Rev. Joseph Thompson, the director of the school’s Office of Multicultural Ministries. “Though no amount of money could ever truly compensate for slavery, the commitment of these financial resources means that the institution’s attitude of repentance is being supported by actions of repentance that can have a significant impact both on the recipients of the funds, as well as on those at VTS. It opens up a moment for us to reflect long and hard on what it will take for our society and institutions to redress slavery and its consequences with integrity and credibility.”
Semantic Tags: African-Americans • Episcopal • Reparations • Virginia Theological Seminary