WASHINGTON– Achieving the Dream, an education based non-profit, hosted a briefing on Capitol Hill on Thursday alongside their national partners to discuss the newly-released report of the Government Accountability Office which focuses on student parents.

Their partners include The Aspen Institute; Center for Law and Social Policy; Hope Center for College, Community and Justice; the Institute for Women’s Policy Research and the nonprofit Rise. 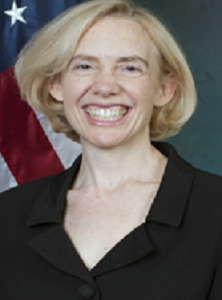 She noted that in 2015-2016, an estimated 22 percent of undergraduates were parents. Among them, 55 percent were single parents, 44 percent worked full-time while enrolled in a postsecondary institution and 64 percent attended school part-time.

Many student parents lack the adequate support of child care, financial aid or public benefits. Due to those challenges, they drop out of school at higher rates, she added.

Emrey-Arras said that finding quality child care can be a challenge, often costing more than in-state tuition at a public university.

Still, various child care assistance programs are readily available to students. One of the programs highlighted in the report was the Child Care Access Means Parents in School (CCAMPIS). In 2016, it helped 3,300 students pay child care costs for about 4,000 children. But over 4,000 children remain on the wait list.

While student parents can ask their schools to include an allowance for dependent care expenses, many institutions don’t often publicize that information. The report examined the websites of 62 institutions who claimed to have a number of student parents or support systems in place for them. Two-thirds of their websites did not mention the allowance option.

“We hear criticism that people are saying that colleges need to be providing every single support for every single student in their life,” said Lindsey Reichlin Cruse, study director at the Institute for Women’s Policy Research. “No, but they can do more to help connect them with the available resources and that starts with more information clearly and transparently communicated to students, particularly student parents who have more life circumstances that they are dealing with.”

In addition to analyzing the details of the report, the briefing consisted of a panel to discuss the first-hand experiences of student parents.

Ventura-Lazo, a first-generation American and college student, conveyed his college journey as a student parent at NOVA.  Not believing higher education was for him, he decided to drop out and look for a job.  However, upon “reaching the glass ceiling” at work, he decided to return to school.

“I realized that post-secondary education was going to be important to uplift me and my family,” he said.

Lewis, who attended the College of William and Mary when her daughter was just three months old, found it difficult to relate to other students on campus. She gave the example of a professor asking the class about the activities they participated in over the summer. While other students were traveling with their families, participating in unpaid internships or going on “archeological digs in Egypt,” Lewis was working at Target to support her daughter.

Her experiences in school were not all daunting. 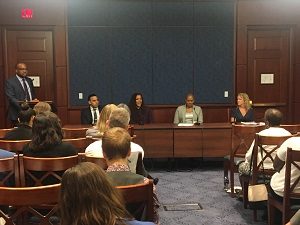 Lewis said that one of the benefits of being a student parent was that  she had more of an ability to connect with the material she was studying on a personal and deeper level while her classmates only understood it from the textbook-level.

It is important to “think about the students that come onto our campuses and schools and their diverse backgrounds as assets,” she said. “And not as ‘we now need to conform to accommodate them’ but understanding the richness that they bring into the classroom that enhances our institutions.”

Lewis also referred to student parents as the “invisible population” adding that too often they do not see themselves in campus brochures, posters and advertisements.

“They exist, they are important and should be recognized and counted,” she added.

Willis brought a more administrative perspective to the panel. Since her recent arrival at ECC, Willis has used her experience as a student parent to provide more resources to the campus community.  She is working to develop new library spaces that will include a child’s library area so students can study without feeling ashamed of their “status as caregivers or parents.”

Willis said that she also wants to provide transportation assistance, a food pantry and various scholarship opportunities for student parents at her institution.

“We as colleges should consider transforming our spaces to reflect an environment that welcomes student parents with open arms,” she said.

In terms of the cultural shifts that need to occur at post-secondary institutions, Willis emphasized the need to alter how individuals view and identify non-traditional and traditional students.

“We need to change our narrative and how we identify our students and how they identify themselves,” she said. “And to do away with some of these archaic terms that are no longer valid today.”