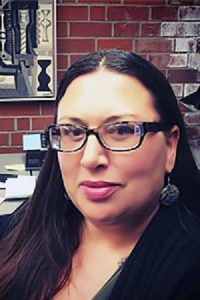 An article last year titled “The Capitol of Suspensions,” by Dr. J. Luke Wood, about the suspension and expulsion rates of African-American students in the Sacramento region caught the attention of Dr. Molly Springer, dean of equity and student success at Sacramento City College. The article noted that the second largest expulsion rate in Sacramento was for the Native American male population.

“As our Native students traverse K–12…I’m concerned about their education experience because I want it to be healthy and welcoming so that we get them in college,” said Springer, one of the report’s authors and a member of SNAHEC.

There are 109 federally recognized tribes in California. The more than 30,000 Native American children and youth attending California public schools often encounter issues of bias or lack of understanding in their classrooms. Native American girls were suspended at a rate of 4.6 percent and boys at the rate of 9.6 percent. The data on school suspensions and expulsions comes from the California Department of Education and was reported by school districts.

“We looked at the data side-by-side and ranked the districts in comparison to each other,” said Springer. “This was an opportunity for us to paint a bigger picture. Implicit bias is a factor. A welcoming environment is part of it. The community surrounding. The education and quality of the teachers and their cultural competence. All of that plays into the situation.”

The report “From Boarding Schools to Suspension Boards: Suspensions and Expulsions of Native American Students in California Public Schools” makes reference to the boarding schools, a dark time in American history when Native American youth were sent to schools to assimilate them to Euro-American culture.

“Education was used as a tool to subdue and suppress Native voice,” said Springer, a citizen of Cherokee Nation. “We’re seeing this as another way to eradicate the voice of Native youth.”

In addition to quantitative data, the report includes stories offered by parents relative to their children’s experiences. The goal is to highlight the ways in which Native American youth are impacted by discriminatory behavior and how that can ultimately affect their academic success and path to higher education. One story involved police being called because a boy smelled of sage after a tribal ceremony.

Kindergarten through third grade is the time of the greatest disparity in suspension rates with Native American boys two and a half times more likely to be suspended than the average and girls 3.7 times more likely than the state average. The highest percentage of suspensions occur in middle school, where Native American boys are suspended at a rate of 16.5 percent and girls at 9.1 percent.

Kings County had the highest expulsion rates, with Native American boys 40 times more likely to be expelled than the state average. 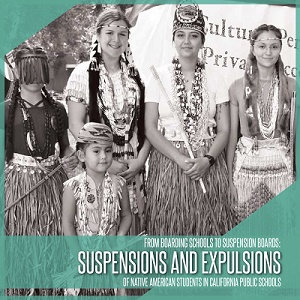 “One of the major findings of the report is that a lot of suspension is in-school suspension time for willful disobedience,” said Springer. “Willful disobedience is a subjective and biased category where you’re suspending a student because they’re not behaving in a way that you think they should behave in the classroom.”

Suspension rates decline in urban areas, such as Los Angeles and San Francisco. Springer said this may be due to acculturation or more diversity and cultural competency training among the teachers.

“Each district could pay a little bit more attention to what exactly is going on with Native students versus just suspending them,” said Springer.

The root causes of dropouts begin early. Springer noted students are being punished for being themselves and that manifests in retention problems. Recommendations for positive action are included in the report, such as working collaboratively with parents and tribal officials as well as offering teachers and administrators cultural competency training. Building a pipeline to higher education means fostering a love of learning and making the classroom a desirable place to be.

“This is what the data looks like when districts are self-reporting,” said Springer. “It requires further study. It requires local districts to dig deep and for parents and Native communities to pay attention.”

She added: “We want our public to be a working public and be able to be educated and get their degrees and certificates,” she said. “In order to do that, they need to graduate high school. In order to do that, they need to have an experience that moves through high school graduation and into college. It’s everyone’s job to pay attention to Native American students and all students of color, particularly students who have been disenfranchised by the educational system in the past.”

Frat Member Told 911: ‘We Have a Friend Who’s Unconscious’